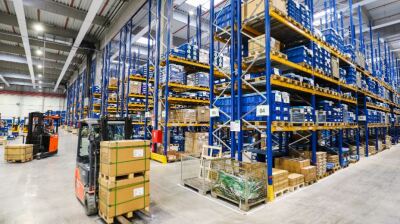 The E-commerce boom has lifted demand for industrial properties in Hungary.
By bne IntelliNews November 22, 2021

The Hungarian real estate market is poised to return to pre-pandemic investment levels, with the year-end pickup expected to lift the value of property investment in Hungary to €1.2bn-1.3bn this year, 20% over last year's level, data from consultancy CBRE show. The outlook for the sector is good, with next year's figures likely to reach pre-crisis levels at  €1.5bn-1.7bn.

The pandemic had interrupted the boom of the market that began in 2015, with real estate investments falling 40% to around €1bn in 2020.

Investment volume on the property market reached €750mn at the of October, head of the Property Developers Roundtable (IFK) Erno Takacs said.

Office space has accounted for 85% of property market turnover this year, up from around 40% before the pandemic. Retail space, which earlier made up about 40% of transactions, now accounts for under 5% of turnover, he added.

Vacancy rates continued to rise at the beginning of this year to 9.8%, but demand has picked up noticeably in H2, with offices starting to fill up again. In Central Europe, only Prague has a lower vacancy rate, with Warsaw, Bucharest and Bratislava above 12%.

Industrial real estate is on track for spectacular growth as supply remains constrained in the premium segment, while demand got a huge boost from the surge in e-commerce. The industrial  stock in the capital region stands at 2.6mn sqm, with 170,000 sqm of hall space completed this year and a further 400,000 sqm under construction. A significant number of new projects are expected to come to the market in 2022, which could boost investment flows.

Hungarian investors are increasingly present in the region, especially in Poland, Romania and the Balkans.

Hungary’s residential property market was unphased by the pandemic. The price increase was one of the highest among EU countries since 2015.

The housing market is driven by supply and demand-side stimulus. Lower VAT on new home constructions is fuelling supply and generous government subsidies and cheap financing are driving up demand.

The impact of the National Bank's green retail mortgage loan scheme is already being felt. The MNB launched a green housing loan programme last month, providing refinancing to commercial banks at 0% interest, which will be lent to clients at a fixed rate of 2.5%.

Hungary has one of the highest rate of ownership is Europe. In light of the rising inflationary environment, demand for homes will remain elevated.

Russia’s industrial output decline slows to only 0.1% in August
8 hours ago
Putin's popularity remains high, but even after a hit in September it is still at 77%
8 hours ago
Russia on track to have a record-smashing grain harvest
2 days ago
Bosnia posts annual CPI inflation of 16.8% y/y in August
2 days ago
IMF sees Romania’s economy growing by 4.8% in 2022, analysts are even more bullish
3 days ago