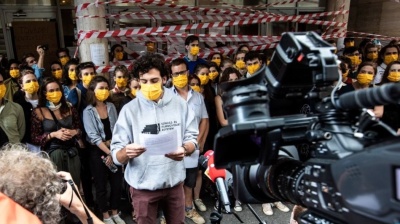 Students demand resignation of the board of trustees in charge of Budapest’s University of Theatre and Film Arts as of September 1.
By Tamas Szilagyi in Budapest September 2, 2020

Students of Budapest’s University of Theatre and Film Arts (SZFE) cordoned off the entrance of the building in central Budapest to protest the transfer of the university to a foundation led by appointees of the government, local media wrote on September 2. The moves came after members of the Senate stepped down on Monday as the board of trustees stripped them off all powers.

The Innovation and Technology Ministry, which oversees higher education, announced in June that the SZFE’s operations will be taken over by a foundation from September 1.

In the summer Attila Vidnyanszky, director of the Budapest National Theatre, was appointed to the post of chairman of the five-member board of trustees.

This was a clear signal that the right-wing government of Viktor Orban would aggressively carry out radical changes at the university and appoint its own people by all political means.

The government has been privatising universities through the model of placing them under the control of foundations, led by people close to the cabinet. The model was applied to the country’s leading economics university, Corvinus.

To finance its operations the state transferred 10% of MOL and 10% of Richter shares to foundation worth HUF138bn (€386mn) and HUF132bn respectively at current market prices.

So far no details emerged on the future financing of SZFE from the foundation. The government has hinted at the establishment of a new campus.

Vidnyanszky, a staunch supporter of Orban, has for long called for a more pronounced presence of Christian-conservative values in the world of film and theatre. The overwhelming view of conservatives close to Orban is that Hungary's arts scene is dominated by leftist-liberal intellectuals, who are insensitive to the country’s national heritage.

After transforming Hungary’s economic and media landscape the government is making concerted efforts to make a change in this field.

Ethnic Hungarians like Vidnyanszky are playing an important role in this culture war, independent media wrote.

They were appointed to important posts by the Orban government, which granted dual citizenship to Hungarians living outside the border. Their vote played an instrumental role in the supermajority victory of Fidesz in the 2014 and 2018 elections.

Vidnyanszky, born in the Western Ukrainian town of Berehove, has a major say on who receives financing for various projects. He is also a professor of dramatic arts at the University of Kaposvar in southwest Hungary, the second-largest school for theatre art in Hungary.

Critics on the other side of the political spectrum acknowledge his talent, but say that he has gained a dominant position in the theatre scene and after years of being in the background he is taking revenge.

Attacks under the pretext of the "Me-too" movement

After the expulsion of CEU, a private university of Hungarian born billionaire Geroge Soros, and attacks on NGOs critical to the government, the nationalist Fidesz government took an aim at left-leaning cultural institutions.

In December, it adopted a controversial law for theatres and thus increased its powers in the selection and appointment of directors.

A slur campaign by pro-government media against teachers and students of SZFE began in the fall after a sexual harassment case against a prominent director. Although Peter Gothar was immediately fired, the disinformation campaign continued.

University leaders spoke of foggy promises by the government and coordinated efforts aimed at breaking their resistance to the ongoing transformation.

The ministry intentionally blocked the appointment of elected leaders of SZFE, which also served as a pretext for change.

The conflict escalated on Monday when members of the Senate resigned after the new board of trustees stripped them off all essential powers. The Senate will no longer have a say in the budget or in appointing heads of departments.

Outgoing officials said "any appearance of the leadership’s independence can only be maintained by making unacceptable compromises". They vowed not to take up any position at the helm of the university "until its autonomy is restored".

Students blocking the entrance of the university vowed to continue the resistance until the new board steps down. Local media is speculating about a long-lasting stand-off.

In either case the new conservative leadership will face an uphill battle in winning the hearts and minds of students. An online poll of students showed that an overwhelming majority rejected the government-appointed delegates and Vidnyanszky himself.