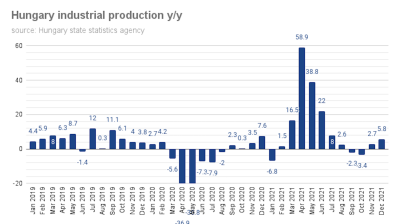 After six consecutive months of declines, the output of Hungary’s automotive manufacturing, the biggest segment of the industrial sector, rose 6.8% y/y in January, the Central Statistics Office (KSH) said in a detailed reading on March 11.

The automotive segment, which accounts for around one fifth of the manufacturing sector, has been hit by production shutdowns and scale-backs because of the global semiconductor shortage, but the outlook is further clouded by the impacts of the war.

German carmaker Mercedes-Benz is reducing the number of shifts at its plant in Kecskemet from three to two shifts from March 16 until the end of the month because deliveries from suppliers in Ukraine have stopped.

The company is cooperating with its suppliers and following the situation closely while working on solutions to secure its supply chains, the unit said. Last year, the Hungarian plant turned out over 160,000 vehicles.

Magyar Suzuki said it has not experienced any supplier problems, but has already stopped deliveries to Russia and Ukraine from March.

The company, which produced 112,475 cars last year, 87% of which were sold on foreign markets, plans to continue production in two shifts at its plant in Esztergom.

Headline industrial output rose 8.9%, the fastest rate since the summer, KSH confirmed. Adjusted for the number of workdays, output rose 7.1%. In a month-on-month comparison, output rose a seasonally- and workday-adjusted 1.9%.

Industrial sector sales increased by 9% in January, as domestic sales rose 13.1% and export sales were up 6.5%.

The order stock in segments of the manufacturing sector tracked by KSH was up 24.8% at the end of January from 12 months earlier. New order volume rose 1.6% as new domestic orders rose 19.1%, but new export orders fell 1%.

Investments launched during the crisis supported by HUF2 trillion (€5.3bn) in grants and credit are now coming to fruition, the Ministry of Innovation and Technology said. Industrial output expanded 9.6% last year, bouncing back from a 6.1% decline. Analysts said it is too early to give projections for 2022 due to uncertainties.

Soaring energy costs and supply problems were compounded by the impact of the war on the one hand, and new capacities in the electronics and automotive industries on the other. Overall, Hungary’s sales to Russia and Ukraine combined account for 4-5% of total exports.