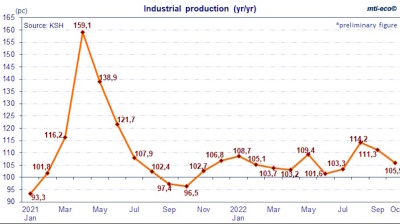 Output of the automotive industry, Hungary's biggest manufacturing sector, rose 32.1% y/y in October (chart), albeit from a low base hit by the semiconductor shortage, a detailed release of data by the Central Statistics Office (KSH) on December 14 shows.

On a monthly basis, output shrank for the first time in five months, down 3.5%.

Y/y growth of the segment edged up from 31.6% in the previous month. The automotive segment accounted for 25% of manufacturing sector output in October. The detailed data show output of the computer, electronics and optical equipment segment, accounting for 11% of manufacturing, rose 20.1% y/y.

Output of the food, drinks and tobacco segment, which made up 13% of manufacturing sector output, fell 1.1%.

Despite the October downturn, analysts remain bullish on the sector’s outlook given the healthy order books, standing 21% above last year's level. The industry could be a positive contributor to GDP in 2023. The industry contributed 1.7pp to Hungary’s 4.0% headline GDP growth in Q3.