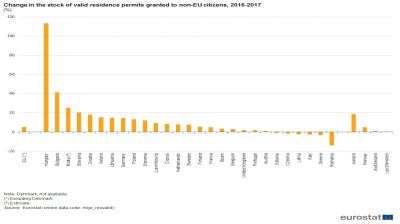 The stock of valid residence permits Hungary issued to non-EU citizens doubled in 2017 after the government eased restrictions on the employment of non-EU citizens and before the controversial residence bond programme was phased out, it was announced on May 21.

By the end of 2017, some 117,000 foreigners held a residence permit in Hungary, which represents a 113% annual growth over a 12-month period, the largest increase among EU members, according to figures from Eurostat. The yearly growth was 41% in Bulgaria and 25% in Malta. In total, 20.3mn valid residence permits were granted to non-EU citizens permitting them to reside in one of the European Union member states.

The increase was partially the result of Hungary easing restrictions on the employment of non-EU citizens in an effort to manage the labour crunch, but last-minute applications for the government’s residence bond programme also lifted the figures.

The government launched the scheme in 2013, granting residence permits to foreigners who purchased local bonds for €250,000, which was raised to €300,000 later.

The scheme allowed the long-term stay of 20,000 non-EU citizens until 2017 when the programme was suspended indefinitely. Businessmen close to the government profited from the programme as only selected intermediaries were allowed to sell the bonds, most of them operating offshore.

The central Hungarian town is in a rush to build new homes, schools and auxiliary facilities to host Russian engineers, leading to a surge in home prices in the region.