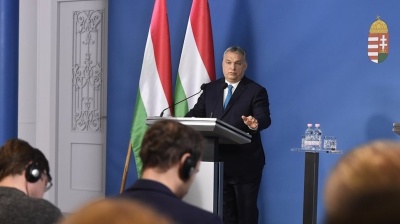 Prime Minister Viktor Orban has suggested economic stimulus will be necessary to keep Hungary's GDP growth above 4%, and said the government has no target date for adopting the common European currency, at a rare press appearance on January 10. Hungary's illiberal strongman also made it clear for the first time that he wants an anti-immigration majority in all EU institutions.

The first regular press briefing of the year was held by Orban, which raised speculation that there was going to be an announcement of huge importance. Government-friendly media reported that Hungary's top politician could make these new year press briefings regular in the future.

The international press conference marked a rare chance for journalists to address questions directly to Orban, who has shied away from giving interviews to independent media in the last eight years. Government officials blamed capacity constraints of the room for rejecting the invitation of a half a dozen media outlets, all critical of the government.

Nevertheless, the prime minister received some tough questions during the two-hour session about the wealth of his friends and family members, the crackdown on the Central European University (CEU), academic freedom, and the tilted media powers.

Orban focused on economic issues initially and later went on to lay out his visions for Europe.

Orban summed up the economic achievements of the past year: rising economic output and household spending, record employment and falling state debt, but said that economic stimulus in the first quarter is needed to keep to this year's 4.1% growth target.

Analysts expect Orban to expand on the stimulus plans and announce further support to families to address Hungary's demographic crisis during his annual state of the nation speech scheduled for February 10.

Without any boost to the economy, GDP growth could be 3.9% in 2019, Orban said, citing his finance minister. Higher tax revenues due to stronger growth and the whitening of the economy could provide cover for financing any stimulus, local media reported.

He praised his Czech counterpart, Andrej Babis, for his record in creating employment and he vowed to do even better. The number of employed people could stabilise at 4.5mn-5mn in the long term, which is near full employment, he said. In his view, the labour shortage is rather positive than negative as it allows workers to demand higher pay and better training. The Hungarian economy needs to grow at a pace that can be supported by a workforce of this size, he said, suggesting that Hungary needs to take more steps to improve competitiveness by increasing efficiency.

He defended the government's amendments to the Labour Code on overtime rules, which has sparked widespread anti-government protests and united opposition parties. He attributed these protests to the European Parliament election campaign. Labour unions are making preparations for nationwide demonstrations and road blockades on January 19.

In the last few days, multinational retailers Tesco and Spar have announced they are not going to apply the new overtime rules, which would allow an annual 400 hours of overtime work.

Orban confirmed that Hungary has no target date for adopting the common European currency. Nobody knows in what direction the eurozone will develop in the future, which requires a "cautious, wait-and-see" policy, he added.

Asked to comment on whom he would propose to fill the position of governor of the central bank when Gyorgy Matolcsy's six-year mandate ends early this year, Orban said: "no surprise is expected".

Orban lays out his vision for a new Europe

Orban has divided competing political sides in the European Parliament election into those supporting or rejecting immigration, which has replaced the old left-right party divide. Orban said that immigration will shape the future of Europe in the decades to come. Migration had driven western and central Europe far apart, he said, adding that the question was how they can remain united "now that they've chosen such different futures".

Hungary has staunchly opposed the EU's immigration policies and refused to take in migrants.

Orban praised Italian Interior Minister Matteo Salvini's plans of forging an Italian-Polish axis that would replace the current French-German leadership in the EU as one of the best things to happen.

It is good news because the European People’s Party (EPP) is looking for pro-immigration allies, he said.

Orban called Salvini a “hero” for his measures to stop illegal immigration.

When asked about his support for EPP leader Manfred Weber in his bid to become the next European Commission president, after Weber approved the Sargentini report that condemned Hungary's failing democratic values in the European Parliament, Orban said Weber was duped.

He also took a shot at liberal politicians. There is no denying that Emmanuel Macron is an important figure, moreover, the leader of the pro-immigration forces. "It is nothing personal, but a matter of our countries' future".

He called liberals the “number one enemies of freedom” when asked about Liberal EP party leader Guy Verhofstadt's comments about him. The Belgian politician said Orban is neither a Democrat nor a Christian.

Verhofstadt was featured in an anti-Brussels campaign after the European Parliament voted to trigger Article 7 against Hungary. One of the fiercest critics of Orban, the leader of the ALDE group hit back with a mobile billboard campaign that circulated in Brussels and later Hungary, with a message written on it that says “first he took our money, now he wants to destroy Europe”.

Opposition leaders have blasted Orban for evading questions on major political issues or even lying about Hungary's real situation in some cases.

Timea Szabo, co-leader of Parbeszed, said the prime minister had been evasive about the true state of Hungarian health care, education and wages.

MPs also criticised Orban for refusing to answer questions about the wealth of his friend Lorinc Meszaros, who last year topped Hungary's rich list. Orban deflected questions on the wealth of his family members and friends, saying that neither he nor the government deals with matters of business.

The leader of the green LMP party accused Orban of being misleading over the Paks expansion. Rosatom has failed to obtain the necessary permits for the start of the construction. The construction of the two blocks has suffered delays as the ground works should have started in 2017. It is unlikely the €12.5bn project could be completed before 2030, instead of the target date of 2025-2026.

Socialist MPs said Orban was scared of emerging cooperation between opposition forces when he said opposition parties were digging their own grave if they filed a joint list for the EP elections.

Steady growth of cases since impoverished country relaxed its nationwide lockdown. PM among those that have contracted the virus.