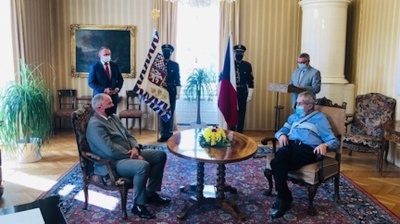 Czech minister of health Adam Vojtech announced his resignation at a press conference on September 21. On the same day, epidemiologist Roman Prymula, who was one of the most important figures during the first wave of the COVID-19 crisis, was appointed to the position by the President Milos Zeman.

Vojtech resigned after less than three years. He remains a member of parliament. In his own words, he wanted to create space to tackle the COVID-19 pandemic at a time when the situation in Czechia has significantly deteriorated.

The number of new cases rose sharply in September, exceeding 3,000 per day on September 17. A few days ago, Vojtech admitted that he should have insisted that the face masks were worn indoors again since the beginning of September.

According to respected epidemiologist Rastislav Madar, Vojtech was one of the best post-revolutionary health ministers. He listened to the opinion of experts, but sometimes he had a problem enforcing it in the government, Madar told the news agency.

“Due to the pandemic he had to deal with an acute situation that is unprecedented, but he still did well most of the time and managed to withstand enormous pressure," said Madar.

Following the departure of the then-deputy minister Prymula, Madar was one of the key experts who advised the minister at the time of the epidemic. However, he left after disagreements at the end of August.

Vojtech said that during his governance, a number of changes in Czech healthcare had been completed or started. Among other accomplishments, he mentioned the launch of electronic healthcare, reform of psychiatric care and building a network of emergency admissions in hospitals.

Political experts, as reported by the news agency, viewed the resigning minister as a whipping boy of Prime Minister Andrej Babis. Additionally, they associated the resignation with the upcoming regional and senate elections, ahead of which Babis is losing ground due to the recent resurgence of the pandemic in the country.

“I think minister Vojtech was a prime minister’s whipping boy, now a scapegoat. He acted correctly in enforcing stricter hygiene measures, but the prime minister wanted to please the people, which contributed to the current situation. However, as political laws imply, the head that falls is the minister’s one,” said Josef Mlejnek from the Faculty of Social Sciences at Charles University.

According to Lubomir Kopecek from Masaryk University in Brno, it is surprising that Vojtech remained in office for so long. His position was marked by some mistakes, such as an unsubstantiated statement before the crisis that there is enough medical material. “He sometimes found himself in rather unworthy situations. Especially in the summer, due to the prime minister’s communication and marketing strategy, Vojtech looked like ... a not very important fifth wheel,” he added.

The president of the Czech Medical Chamber Milan Kubek told the news agency that Vojtech should have left a long time ago. “He was supposed to leave after it turned out at the beginning of the year that he either consciously lied or interpreted the lies that his subordinates had pushed him about our alleged readiness for the coronavirus epidemic,” he said, quoted by the news agency, adding that Vojtech was just a mediator and everything important had to be addressed by the prime minister.

Also according to the opposition, which has been calling for Vojtech's departure since the spring, the change in the head of the Ministry of Health came late and it does not solve anything as Babis is blamed for the crisis.

Vojtech’s successor Prymula had been a deputy health minister since 2017. Previously, the former director of the Hradec Kralove University Hospital worked as a consultant at the ministry. He had to resign as deputy minister due to a lack of security clearance. This requirement has now been lifted. The general public got to know Prymula after the outbreak of the coronavirus epidemic, when he coordinated actions against the spread of the disease at the ministry.