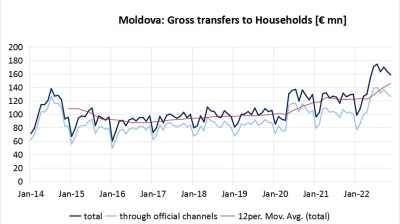 The gross transfers from abroad to Moldovan households, expressed in euros, increased by 2% y/y to €1.6bn in January-November, according to the National Bank of Moldova (BNM). The transfers from Russia soared after the war began in Ukraine.

The year 2022 thus marks a second significant increase in the transfers received by Moldovan households from abroad, after the inflows surprisingly rose during the COVID-19 year 2020 and remained robust in 2021.

This time, the inflows seem to be related to Russia and the war in Ukraine. Detailed January-September data already available reveal a significant increase in inflows from Russia after the war began at the end of February. They increased fourfold in Q2 last year, and 2.8 times in Q3 compared to the same periods of 2021.

While in Georgia (a country witnessing a similarly sharp rise of inflows from Russia), the stronger inflows from Russia seem to follow moves to Georgia by Russians seeking to avoid mobilisation or the economic hardship at home, in Moldova they may reflect more formal transfers of money from the Moldovan diaspora (as the cheap land transport, facilitating informal and unreported transfers, is no longer possible and this decreased mobility). The same logic may explain the rise in inflows during the pandemic.

However, it is not unlikely that some Russians choose Moldova instead of Georgia as an escape route towards Europe.

In Q3 last year, the transfers from Russia to Moldovan households increased 2.8 times to $142mn and the share in total transfers quadrupled from 7% to 28%, according to BNM data quoted by MoldStreet.com.

Russian foreign minister speaks of Moldova as the “next Ukraine”
M&A in Emerging Europe fell by 20% to €32.93bn in 2022
Moldovan ex-president Dodon accused of trying to flee the country