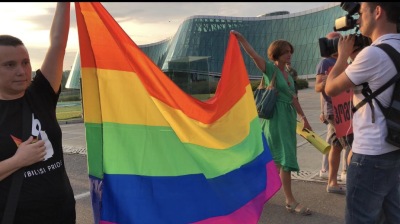 Georgia celebrate Pride month with a controversial march and enflames passions every year. / wiki
By Neil Hauer in Yerevan July 5, 2021

Georgia’s Pride Week has kicked off amid now-familiar scenes of protests by Georgian church leaders and far-right groups.

Police have arrested 20 people at a far right protest attempting to disrupt the launch of Pride Week in Tbilisi.

Queer rights group Tbilisi Pride launched Pride Week on July 1 with a closed screening of the documentary film ‘March for Dignity’ for around 200 guests in the Khidi Club.

The event was heavily secured by police. Anti-Pride groups unsuccessfully attempted to block the road outside the club and were contained by police on the opposite side.

Among those arrested were Zurab Makharadze, an anchor on far-right TV channel Alt Info, who during the protest hurled homophobic slurs and called on others to reach the club.

Pride Week is scheduled to culminate in the ‘March for Dignity’ along the central Rustaveli Avenue in the Georgian capital on 5 July.

Tbilisi Pride said that the public gatherings, including the march through downtown Tbilisi with the motto ‘come out for solidarity’, would help to highlight their grievances over the state’s inaction against discrimination and hate-motivated crimes.

Despite some recent improvements in the legal system, Georgia is considered to be one of the most intolerant countries in the post-Soviet space towards queer people. In a 2019 survey by CRRC Georgia, 87% said they would disapprove of a person like them doing business with a homosexual.

The organizers of Pride Week said they were happy the safety of their guests was ensured on 1 July but that they have not received safety guarantees for 5 July’s Pride March from the authorities.

The previous attempt to hold a pride march, in June 2019, was cancelled after the police refused to protect the event and the location was leaked to far-right groups.

On 15 June, anti-queer and conservative leader Levan Vasadze, who recently formed his own political party ERI and was instrumental in mobilizing crowds against the planned 2019 pride. gave the government 10 days to ‘cancel’ the events. By 25 June, he claimed he had been hospitalized in Istanbul with an undiagnosed illness and confirmed later he would not be present in Tbilisi during Pride Week.

Vasadze’s followers, other far-right groups, as well as the Georgian Orthodox Church have largely focused on Georgian queer activists’ foreign allies since Pride was announced.

On 28 June, 28 Members of the European Parliament criticised Irakli Kobakhidze, chairman of the ruling Georgian Dream party, for suggesting that Tbilisi Pride ‘ought to be denied’ to hold their march, ‘given the whole context’. He did not elaborate further. The MEPs urged the Georgian Interior Minister to ensure the safety of the events.

US Ambassador to Georgia Kelly Degnan and EU Ambassador Carl Hartzell also personally became targets of protests by a group led by ultra-conservative activist Guram Palavandishvili, who on 30 June demanded the ambassadors leave Georgia ‘immediately’ for their advocacy of queer rights.

On 1 July, the diplomatic missions of 17 countries — including the US, UK, Estonia, and Israel — and the UN and EU offices in Georgia also called on the Georgian government to ensure Tbilisi Pride's safety.

Junked American cars do a roaring business in Georgia