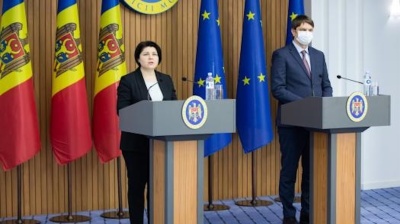 Prime Minister Natalia Gavrilița and her deputy Andrei Spinu announce plans for a state of emergency that will help them gather the funds needed to stop gas supplies being cut off.
By Iulian Ernst in Bucharest January 20, 2022

Russian gas giant Gazprom said it will cut off gas supplies to Moldova at 9am on January 21 unless Moldova’s transport and distribution company unless Moldovagaz makes the $63.1mn upfront payment due for the month by the end of January 20.

The warning comes after Gazprom cut by one third its gas supplies to Moldova in October and later gave the country a 48-hour deadline for the monthly payment in November. At that time, however, the weather was warm and the consumption was low — as opposed to now, when an interruption or even a 30% cut in supplies would have a major impact.

The letter sent by Gazprom on January 18 notified Moldovagaz that it would cut the natural gas supplies “down to 0.0 cubic metres per day” unless payment is made, Deschide.md reported publishing the letter.

"According to the information obtained, Gazprom has reasonable doubts about the ability of Moldovagaz to ensure, within the contractual terms, the full payment for the volumes granted. Failure to make the payments will constitute a breach by Moldovagaz of the contractual provisions," the letter reads.

At the same time, Gazprom stated that it reserves the right, in case Moldovagaz fails to fulfil its obligations, to "unilaterally terminate" the contract.

Prime Minister Natalia Gavrilita, quoted by Mold-Street.com, said that the government has also received a notification from Gazprom on the possible interruption of the natural gas flows.

The government is going to disburse the consumer subsidies for the months of January and February to Moldovagaz in advance and also plans to put on hold VAT claims against the company to help it make the payment in time and avoid disruptions in the natural gas supplies.

Deputy Prime Minister Andrei Spinu said that Moldovagaz managed to pay $38mn to Gazprom by January 20, but it still needs $25mn to complete the upfront payment due immediately.

But this would be only a short-term fix and more sustainable measures must follow — whether they are increasing the subsidies, hiking the end-user price or a combination of these. Market regulator ANRE has not commented so far on the situation generated by the negative financial deviations incurred by Moldovagaz.

Deputy Prime Minister Andrei Spinu remarked on a “visible change” in the attitude of Gazprom after pro-EU candidate Maia Sandu defeated pro-Russian candidate Igor Dodon in the 2020 presidential election and her Party of Action and Solidarity (PAS) came to office last summer. While Dodon was in power, Gazprom had accepted delayed payments and even the accumulation of debt.

Spinu said the current crisis is a matter of cash flow and Moldovagaz should have settled it, possibly with the help of its major shareholder Gazprom. The Moldovan authorities could not accommodate the sharp rise in price made by Gazprom in January and the revenues collected by Moldovagaz do not cover the payments it must make to Gazprom, Spinu explained, implying that the negative corrections incurred by Moldovagaz will be covered in the future.

"We regret that Moldovagaz's majority shareholder [Gazprom] failed to support its own company in order to overcome this situation. It is clear a change of attitude compared to the past years, which does not help in any way," said Spinu in an ad-hoc press conference on this topic.

In a statement to Gazeta.ru, a spokesperson for Russian President Vladimir Putin rejected allegations about political pressures put on the pro-EU administration in Chisinau, claiming that “Gazprom's possible suspension of gas supplies to Moldova is a commercial one and is not under the jurisdiction of the Kremlin.”