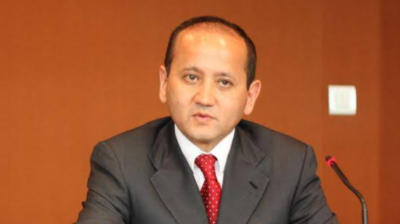 Kazakhstan’s authoritarian President Kassym-Jomart Tokayev on January 7 stepped up his efforts to delegitimise the protests that have this week swept the country by reasserting that they have been organised and driven by foreign-backed “criminals”, “bandits” and “terrorists”. He has instructed the country's security forces to “use lethal force without warning”.

Such has been the lack of democracy in the Central Asian nation throughout its three-decade-long post-Soviet independence that no substantial organised political parties or movements of opposition have taken shape, meaning the many thousands who have come out on the streets during the unrest have lacked leadership and direction. January 7 thus brought another interesting development when self-exiled France-based Mukhtar Ablyazov stepped forward and attempted to fill the vacuum of opposition.

Ablyazov, however, is a hugely controversial figure. A former Kazakh energy minister, he headed one of Kazakhstan’s largest banks, BTA Bank, from 2005 to 2009 and, with refugee status in France, leads the Democratic Choice of Kazakhstan (QDT) party—banned in his homeland—but at the same time he is a fugitive whom Kazakhstan has tried and sentenced in absentia for murder and embezzlement.

In interviews with news agencies, Ablyazov nevertheless made his case, telling AFP: "The temporary government that ousts the regime of Nursultan Nazarbayev [the former Kazakh president who ruled from 1990 until Tokayev took over in 2019] will be led by me for half a year ahead of free elections."

Speaking to Reuters, Ablyazov warned that while Kazakhstan was now in geopolitical play, unless the West entered the fray then Russia—which at the invitation of Tokayev has sent troops to help restore order in Kazakhstan—would bring the Central Asian republic to heel in a type of restored Soviet Union.

"If [the West does] not [act] then Kazakhstan will turn into Belarus and [Russian President Vladimir] Putin will methodically impose his programme: the recreation of a structure like the Soviet Union," Ablyazov—who in 2016 faced an extradition request from Russia that was blocked by France’s highest administrative authority as politically motivated—was quoted as saying.

In further remarks reported by AFP, Ablyazov insisted that the regime that has ruled Kazakhstan since the fall of the Soviet Union is nearing its end in a popular revolution. The Russian-led military intervention of five ex-Soviet states requested by Tokayev to help deal with Kazakhstan’s crisis amounted to an “occupation”, he said, and the West should consider sanctions against the Kazakh leadership, with the Kazakh elite known to have “lots of assets” in European capitals like Paris and London.

"I am urging people to organise strikes and block roads to protest their [Russian and other foreign troops] presence in the country," he was also cited as saying, adding: "The more Putin intervenes, the more Kazakhstan will become like Ukraine—an enemy state for Russia."

Tokayev, meanwhile, was in no mood for compromise. Promising the crackdown on the protests would continue, he said: “Abroad there are calls for the two sides to hold negotiations for a peaceful resolution. What idiocy. What kind of negotiations can you have with criminals? We were dealing with armed and well-prepared bandits, both local and foreign. Bandits and terrorists, who should be destroyed. This will happen in the nearest time.”

A problem for Tokayev and Putin is that the troops arriving in Kazakhstan under the Moscow-led Collective Security Treaty Organization (CSTO) are doing so according to the CSTO principle that its member states can assist one another against foreign aggressors. Tokayev may have referred to “foreign-trained terrorists” and “financially motivated plotters” from abroad, but he has presented no evidence for these allegations. Putin is in these circumstances vulnerable to charges that he has mounted a police action inside Kazakhstan.

The US on January 7 said it was closely monitoring reports of the deployment of outside troops in Kazakhstan and added that it had questions about whether the forces were legitimately invited to the country.

"We have questions about that deployment precisely because Kazakhstan, the government of Kazakhstan... has its own resources, and the government is and has been well fortified," US State Department spokesperson Ned Price said.

RFE/RL on January 7 told how its correspondent interviewed an activist with Kazakhstan’s unregistered Democratic Party who was in a crowd of 200 protesters at Almaty’s Republic Square the previous day when, he said, shortly after sundown a group of soldiers opened fire with live ammunition. Aigerim Tuleuzhanova asserted that those who were fired upon were young, unarmed Kazakh activists.

Attempting to push back on Tokayev’s narrative, activists unfurled banners declaring “We are not terrorists!” and “Tokayev: Don’t shoot us!” Tuleuzhanova said.

Moving ahead, Tokayev, who has faced claims that he so rapidly turned to the CSTO because he was not confident that the Kazakh armed forces and police force would stay loyal to the regime should the demonstrations intensify, will have difficulties explaining to Kazakhs why Russian—as well as Kyrgyz, Tajik, Belarusian and Armenian—troops are on Kazakh soil.

"Sovereignty is something that the Kazakh population has really fought for over the years and is extremely proud of," Ben Godwin, a political risk consultant with London-based PRISM, who lived in Kazakhstan for seven years, was quoted as saying by the Canadian Broadcasting Corporation (CBC). He added: "The idea of potentially losing sovereignty due to the presence of foreign forces is very disturbing to many within Kazakhstan."

Polish proposed ban on Russian rubber may give the European tyre industry a flat
3 hours ago
Prague to have a new municipal government after record-long negotiations
8 hours ago
Party congresses of Hungarian opposition demonstrate deep divisions
8 hours ago
At least 500 dead after huge earthquake hits Turkey, Syria in early hours
8 hours ago
Turkish minister tells US ambassador ‘Take your dirty hands off Turkey’ as sanctions sparks fly
14 hours ago