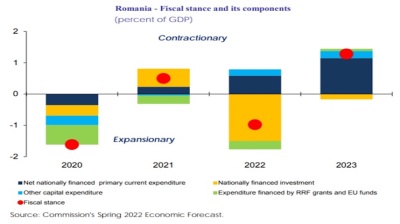 All member states that are legally committed to adopting the euro fulfil the criterion on public finances, except Romania which is the only member state subject to an excessive deficit procedure (EDP), said the Convergence Report published by the European Commission (EC) on June 1.

Romania’s general government balance is seen as sinking back to -7.5% in 2022 after the improvement last year, to later improve to 6.3% of GDP in 2023, under the Spring Forecast quoted by the EC in the Convergence Report.

Commenting on Romania’s fiscal consolidation outlook under the EDP, the Commission estimates a negative 1.1pp contribution to the fiscal stance in 2023 coming from the nationally financed primary current expenditure, as the energy-related subsidies are discontinued.

However, there are negative risks related to the Social Democrats taking over the prime minister position in 2023. Furthermore, estimating whether Romania can meet the 3%-of-GDP deficit target in 2024 remains even riskier, particularly in the context of the electoral calendar: Romania would need to operate the deepest fiscal consolidation exactly during a super-electoral year.

The next report on Romania's euro adoption will set 2029 as the target date, said first deputy governor of the National Bank of Romania (BNR) Florin Georgescu last December — before the surge in inflation and the war in Ukraine.

The euro adoption calendar is typically revised on an annual basis and is included in the Convergence Report submitted by the government to the European Commission.

Romania had a window of opportunity between 2015 and 2017 when it could have applied for the entry into the eurozone's preparatory mechanism, the exchange rate mechanism (ERM II) — but the authorities decided at that time that such a step wouldn’t be wise in the light of the weak “real” convergence (meaning relatively low GDP per capita expressed at purchase parity rates).

The “real” convergence has improved meanwhile, but Romania has since failed on all the other criteria (that count).