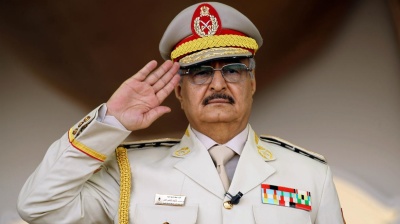 Khalifa Haftar's LNA forces have sought to topple the Ankara-backed and internationally recognised government of Libya.
By bne IntelliNews January 14, 2020

Turkish President Recep Tayyip Erdogan on January 14 warned that he would “teach a lesson” to Libyan warlord Khalifa Haftar if his forces resumed fighting the Ankara-backed Government of National Accord (GNA) in Libya.

General Haftar departed Moscow talks earlier in the day without signing a ceasefire agreement between his Libyan National Army (LNA), based in the east of Libya, and the Tripoli-based GNA led by Fayez al-Sarraj, who did put pen to paper. Negotiations took place after Erdogan and Russian counterpart Vladimir Putin managed to broker a truce in eastern Libya between Haftar and al-Sarraj.

Erdogan, who has sent military advisers to assist the internationally recognised GNA government and is not shy of playing the Turkish nationalist card in the face of domestic economic and political pressures, responded angrily to Haftar’s departure from Moscow, saying in a televised Ankara speech: “We will not hesitate to teach a deserved lesson to the putschist Haftar if he continues his attacks on the country’s legitimate administration and our brothers in Libya.

“The putschist Haftar did not sign the ceasefire. He first said yes, but later unfortunately he left Moscow, he fled Moscow. Despite this, we find the talks in Moscow were positive as they showed the true face of the putschist Haftar to the international community.”

Erdogan has also talked about dispatching a proxy force of Ankara-allied Free Syrian Army militants to help the GNA. Much of Libya was ruled by the Ottoman Empire for three centuries. Turkish companies have traditionally done a lot of business in oil-rich Libya but much of it was disrupted during the turmoil that broke out in the country after the toppling of dictator Muammar Gaddafi in 2011.

Haftar has been backed by Russia, the UAE and Egypt, with the latter two countries providing his forces with air support. Russian mercenaries are also said to be assisting Haftar. He was reportedly flanked by UAE advisers in Moscow.

At the end of last week, it was reported that Turkey plans to sign by February a preliminary $2.7bn compensation deal for work carried out in Libya before the civil war that started nine years ago. The deal would purportedly encompass a $1bn letter of guarantee, $500mn for damages to machinery and equipment and unpaid debts of $1.2bn. Trade officials say the backlog of Turkish contract work in Libya amounts to $16bn, including $400-500mn for projects which have not yet begun. Turkey also looks set to attempt to use a maritime deal hammered out with the GNA to stake claims to gas and oil deposits in the Eastern Mediterranean, but Greece, Cyprus and Egypt, among other countries, have strongly rejected the validity of the agreement.

Germany has said it will press ahead with a Libya peace conference on January 19 even though the Moscow talks ended fruitlessly. The German foreign ministry said leaders and heads of state from 12 countries and four international organisations, including the United Nations, had been invited to Berlin.

The aim of the Berlin conference is to secure a collective pledge that external actors will end their interference in the country by declining to send troops, arm the militia or fly drones. Drones have reportedly caused mass casualties in a war zone centered around Tripoli.

Since the start of the offensive against Tripoli last April, more than 280 civilians and about 2,000 fighters have been killed and 146,000 Libyans displaced, according to UN figures.