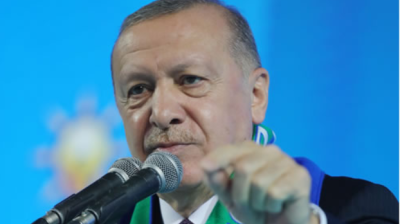 Turkey’s President Recep Tayyip Erdogan on February 15 lashed out at the US with accusations that it was supporting Kurdish militants after his administration stated that Turkish troops had found the bodies of 13 Turkish soldiers, police and civilians abducted by Kurdish insurgents in a cave complex in northern Iraq.

As the barbs flew towards Washington, Turkish police detained more than 700 people, including members of the pro-Kurdish Peoples’ Democratic Party (HDP), in operations against militia of the outlawed Kurdistan Workers’ Party (PKK).

Erdogan directed his ire at the US State Department after it showed some initial reluctance in confirming it believed the PKK was responsible for the reported killings, only stating on the evening of February 14 that the US stood by fellow Nato member Turkey and that it condemned the killings—which reportedly took place during a Turkish military operation involving hundreds of elite troops—if it was confirmed that responsibility lay with the PKK.

Turkey, already angered by Washington’s partnership with Kurdish fighters of the People’s Protection Units (YPG) in neighbouring Syria, was incensed by the conditionality of the statement and summoned the US ambassador to Ankara.

After Erdogan protested in the Black Sea city of Rize that, “It’s a joke. Were you not supposed to stand against the PKK, the YPG? You clearly support them and stand behind them”, US Secretary of State Antony Blinken on February 15 reassured Ankara that Washington was in fact blaming the PKK for the executions of the kidnapped Turks.

Since becoming US president on January 20, Joe Biden has not spoken with Erdogan, an omission that some critics have interpreted as a snub of an important ally. Biden is on the record as having described Erdogan as an “autocrat”.

Erdogan said that Ankara would continue its cross-border operations into Iraq against the PKK, which has waged a decades-old insurgency in mainly Kurdish southeast Turkey, adding: “If we are together with you [the US] in Nato, if we are to continue our unity, then you will act sincerely towards us. Then, you will stand with us, not with the terrorists.”

Erdogan, with his country mired in an economic crisis seen as having started even before the advent of the coronavirus (COVID-19) pandemic, is widely regarded as under pressure in the opinion polls. The HDP cooperated with other opposition parties in the spring local elections of 2019 to hand Erdogan a string of stinging defeats in Turkey’s cities, including in Ankara, Istanbul and Izmir.

A row over how to continue the battle against the Kurds could conceivably drive a rift between the HDP and other parties looking to topple Erdogan.

The hundreds detained across 40 provinces of the country included HDP provincial and district chairs, the interior ministry said.

Opposition parties have previously accused the government of moving too slowly to free the captives.

Omer Faruk Gergerlioglu, an HDP lawmaker, said negotiations had allowed for rescues in previous cases but the government had not considered such an option this time.

“There could have been a solution but this happened due to the government and the ruling party’s general policies,” he told Reuters. “They are not considering a solution or peace right now, therefore they did not attempt such an option.”
Erdogan rejected the criticism, saying that Ankara had worked very hard to rescue the captives. He said the latest cross-border operation into Iraq, launched on February 10, had this objective.

Erdogan’s communications director said on Twitter on February 14: “PKK and HDP are one and the same”.

The HDP denies this. It responded: “Nobody can clean the blood and tears they are responsible for by attacking the HDP.”

The PKK, which has its stronghold in the Qandil mountains of northern Iraq, has been designated a terrorist group by Turkey, the US and European Union.

The YPG was instrumental in the success of the US-led campaign to destroy Islamic State in Syria, suffering thousands of casualties in the process. Nevertheless, previous US president Donald Trump abandoned the YPG in October 2019, when giving Erdogan the go-ahead to mount an incursion into northeastern Syria.