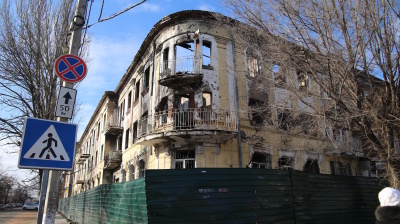 Buildings damaged by fighting in Mariupol.
By Dominic Culverwell in Berlin May 17, 2022

Hundreds of injured Ukrainian troops have been evacuated from the Azovstal steel plant in Mariupol where they had been holed up for more than two months.

The General Staff of the Armed Forces of Ukraine published a statement on May 17 announcing the “evacuation of 53 severely wounded servicemen” to a medical facility in the Russian-occupied town of Novoazovsk.

A further 211 troops were evacuated via a humanitarian corridor to another Russian-occupied town, Olenivka, with plans for an exchange with Russian prisoners of war that would enable them to return to Ukrainian-controlled territory. Dozens of buses were seen leaving the plant, Reuters reported.

Denys Prokopenko, the commander of Azov special regiment, signalled the end of the bloody siege, announcing that Ukrainian soldiers at Azovstal had "fulfilled their orders" and "were distracting the Russian army for 82 days".

The operation to rescue the remaining trapped fighters continues, with Ukrainian President Volodymyr Zelenskiy emphasising the need to save the remaining troops who have been without supplies for several months.

"A difficult day. But this day, like all others, is aimed at saving our country and our people. I want to emphasise that Ukraine needs Ukrainian heroes alive," Zelenskiy said in a night-time address.

However, he mentioned that the ongoing work to rescue the remaining trapped soldiers requires "delicacy and time".

The Red Cross and the UN helped Ukraine strike a deal with Russia regarding the evacuation and exchange of troops, but the situation is still precarious.

Ukrainian MP Lesia Vasylenko told the BBC that the deal must go through and the soldiers must return to Ukraine otherwise "the fate of these very brave men will be absolutely unknown and will be in Russian hands, which is far far from an ideal situation".

The Azovstal plant has been the main focus of the war in recent weeks as thousands of civilians and troops sought shelter in the four-square mile (10.4-square km) facility. The evacuation of civilians took place earlier this month after being co-ordinated in several efforts by the Ukrainian government and the UN.

Nevertheless, Russian forces continued to shell the complex. Ukraine accused Russia of using incendiary weapons last weekend, likely to be thermite or phosphorus. With no supplies and hundreds of wounded, the General Staff of the Armed Forces said the priority now is “to save the lives of the personnel”, calling the soldiers “the heroes of our time”.

Whilst the evacuation was taking place, Russian armed forces also shelled Lviv oblast in Western Ukraine. Heavy explosions were reported, some of the worst in Lviv since the start of the invasion on February 24.