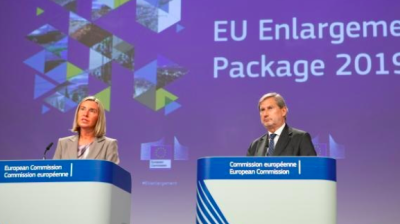 By Valentina Dimitrievska in Skopje May 29, 2019

The European Commission recommended on May 29 that the EU launch accession negotiations with Albania and North Macedonia after both countries made significant reform progress.

This is the tenth recommendation for the start of talks with North Macedonia, but the first unconditional one, and the first for Albania. North Macedonia has been an EU candidate country since 2005, while Albania is a candidate from 2014.

The European Council will have the final say in the decision, probably in June.

“Albania and North Macedonia have embraced the opportunity and delivered on reforms, in particular in the areas identified as crucial by the Council in June 2018,” the European Commission said in the statement.

North Macedonia was particularly praised for the name deal reached with Greece, which became effective in February.

“North Macedonia not only continued its ambitious reform agenda, but also reached a historic agreement with Greece, resolving a 27-year old name dispute, an example for the entire region and beyond,” EU Enlargement Commissioner Johannes Hahn said in the statement.

The dispute was the main obstacle for the country formerly known as Macedonia to advance on its EU and Nato integration path. Under the deal, which was reached despite opposition in Skopje and Athens, the country was renamed North Macedonia.

“North Macedonia has continued to deliver tangible results in key areas such as the judiciary, fight against corruption and organised crime, intelligence services reform and public administration,” the country report said.

For Albania, Hahn said that the country is pursuing profound reforms, in particular a major transformation of its justice system.

The report on Albania confirmed the strong polarisation in the political sphere, following the opposition protests led by the Democratic Party and boycott of the parliament.

“EU governments must agree to allow talks to start. Both countries have delivered. To remain credible with the merit-based process, the EU must stick now to its commitment and respond clearly and positively when countries fulfill theirs,” Hahn said separately in a tweet.

EU High Representative Federica Mogherini said that the Western Balkans are Europe and will be part of the EU's future, of a stronger, stable and united European Union.

“The past year has been a year of positive change, across the region,” she said.

According to some experts, the European Council should not prolong any more the decision on setting a date for both countries to launch accession talks in order to maintain stability in the Western Balkans.

Some EU countries, such as France and the Netherlands, are reluctant to allow the immediate launch of accession talks with Skopje and Tirana, saying that both need more reforms.