Developed markets in Europe have seen more benefits from globalisation within the last 26 years than emerging European, shows the 2018 Globalisation Report from German foundation Bertelsmann Stiftung.

The study of 42 global economies concludes that emerging countries have benefited from globalisation to a much lesser extent than is suggested by public discussions on their above-average export growth, or the relocation of production facilities to emerging economies such as India and China.

The 2018 Globalisation Report analyses globalisation’s effect on growth in a total of 42 countries – which collectively account for over 90% of global economic output. The analysis of all highly developed economies and the most important emerging countries determines the extent to which they globalised between 1990 and 2016 and the degree to which they could profit from this.

Switzerland made the highest absolute gains in per capita GDP due to globalisation between 1990 and 2016, making it the “globalisation champion”. Behind it are Japan, Finland, Ireland, Israel and Germany. The champion from Central and Southeast Europe is Slovenia, which was ranked ninth just after Denmark and the Netherlands. 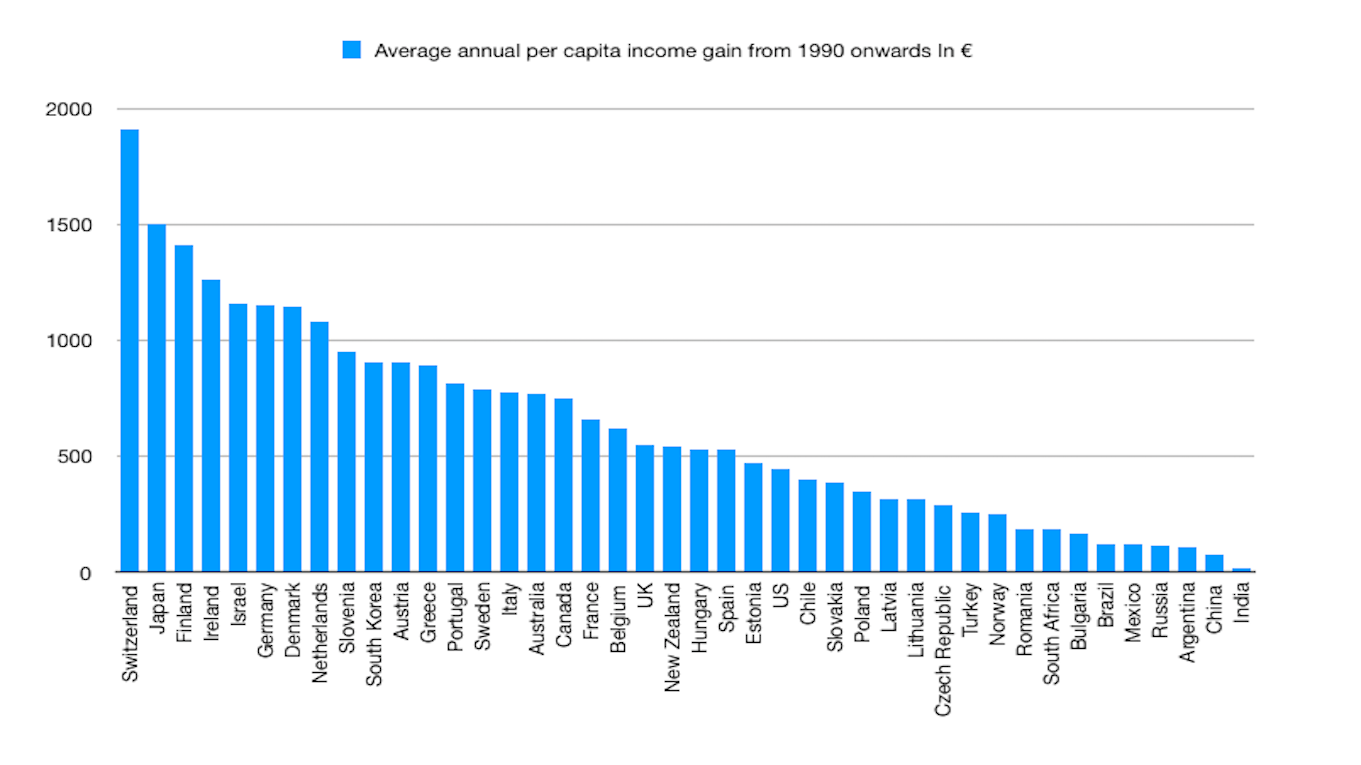 The report notes that “Slovenia opened up considerably leading up to 2004”, the year it joined the EU. While fellow states from former Yugoslavia are among the poorest in Europe, “Per capita GDP in this former Yugoslav republic was already level with Portugal in 1990. On this basis, Slovenia’s increasing globalisation led to substantial gains in income.”

On this list, Hungary is 22nd, Slovakia 27th, Czech Republic 31st, Turkey 32nd while Romania, Bulgaria and Russia took 34th, 36th and 39th spots. India is in the last spot while China is close to the bottom at 39th. 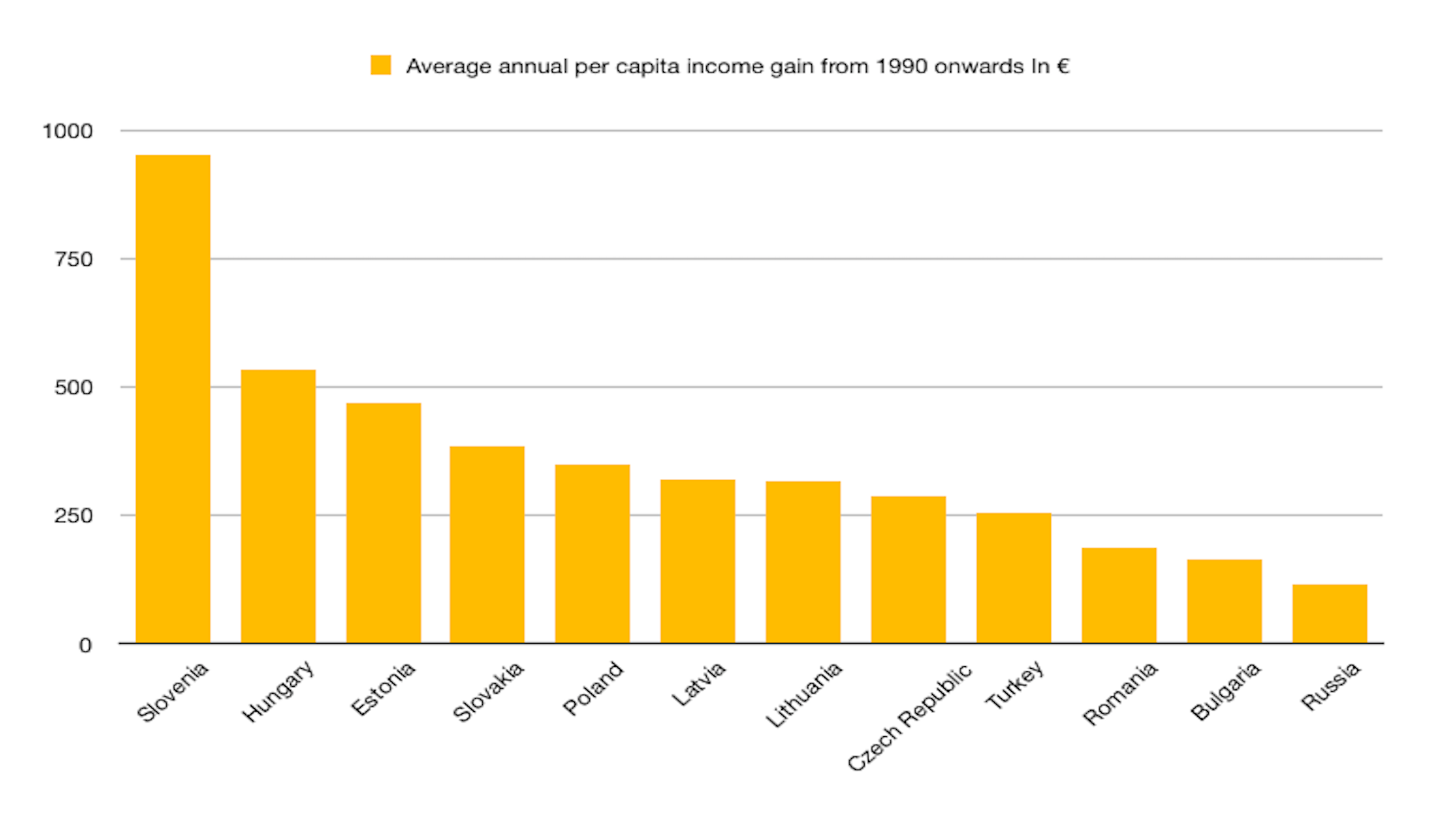 The foundation added that major changes of more than four places can be observed for Slovenia, New Zealand, Norway and the Netherlands. These shifts are mainly driven by above- and below-average dynamics in the globalisation index and economic growth from 2014 to 2016, which was not reflected in the 2016 report.

A separate index looks at how globalised each of the economies are. Among the emerging markets on this index, Hungary is leader from the Central and Southeast Europe, taking 10th place. The Czech Republic follows, being in 15th position, Slovakia is next in 17th, followed by Bulgaria in 22nd, Slovenia in 25th, Romania in 27th, Turkey in 35th and Russia in 36th.

The German foundation explains why the countries that score well on the overall index do not necessarily line up with those whose per capita GDP has most benefited from globalisation. It’s notable that countries with the highest level of globalisation – Ireland, the Netherlands, Belgium — usually do not occupy the top places on the index of per capita gains in income due to globalisation. The diverging places in the two rankings can be attributed to country specific dynamics in global networking. It is not a consistently high degree of globalisation, but rather a growing degree of globalisation over time that gives rise to income gains due to globalisation – Ireland, the Netherlands and Belgium had probably already achieved significant gains in income through international networking before the beginning of the analysis period, the report reads.

“A specific example: The globalisation index for Germany increased by an average of 0.52 points p.a. between 1990 and 2016. Accordingly, an annual average of 0.17 percentage points of the per capita growth in Germany can be traced back to the increase in networking with the rest of the world. As a whole, the average growth in per capita GDP over that period was 1.33%. Thus, globalisation plays an important role in this growth,” the foundation said.

The IHS Markit Russia Services Purchasing Index (PMI) was up slightly to 36.2 in May from 31.3 in April, but still well below the 50 no-change mark, as the services sector has been crushed by the coronacrisis.

Romanian banks post 9% y/y smaller profit in Q1
2 hours ago
Serbia posts strong GDP growth of 5% in 1Q20 despite coronavirus
12 hours ago
Poland’s PMI rises but remains deep in coronavirus trough
20 hours ago
May PMI shows Turkish manufacturing buffeted again but signposts road to recovery
19 hours ago
Russia’s services PMI up slightly m/m in May, but contraction this year is significant
1 day ago