Czech December PMI falls to its lowest level since 2009 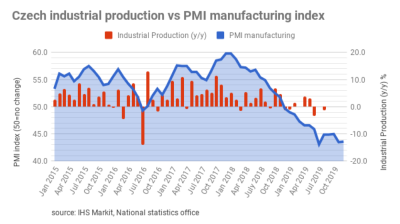 Czech manufacturing sector continued to stagnate in December, but rose slightly to 43.6 from 43.5 in November, partly driven by the sharpest deterioration in operating conditions since 2009, which stemmed from weaker domestic and foreign client demand. Any result under the no-change 50 mark is a contraction in business activity.

“The PMI is in line with market expectations. Index values have been below 50 points since the beginning of 2019,” commented Raiffeisenbank analyst Eliska Jelinkova, the Czech News Agency cited.

Czech manufacturers reported a decrease in production for the thirteenth month in December, linked to a drop in new orders and low client demand. They reduced their workforce numbers at the sharpest rate for a decade, with business confidence also remaining historically low.

“This level of sentiment, however, does not correspond to the actual state of the economy. Other data continue to show solid performance. We can therefore expect that even domestic entrepreneurs will stop worrying about slowdown and their mood could improve,” Jelinkova stressed.

The companies claimed a decline in employment was due mostly to the non-replacement of voluntary leavers.

“Meanwhile, goods producers cut workforce numbers sharply as an increasing number of panellists highlighted greater layoffs as demand struggled to gain momentum. Official data has also pointed towards a contraction in staffing numbers in October, with substantial downside risks for production in 2020 likely to have a knock-on effect across the labour market and for wages,” Jones added.

The rate of contraction eased but remained one of the strongest since 2009.

The manufacturers remained pessimistic towards output in 2020, with the second-lowest degree of confidence since April 2012. In terms of price, cost burdens have dropped for the second month in a row, however, it has been passed to client through a marginal growth in factory gate charges.