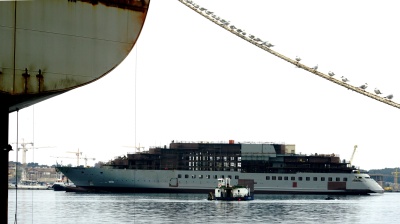 Uljanik has lost several vessel construction deals and has seen its bank accounts frozen several times.
By bne IntelliNews May 1, 2019

A top-level delegation from China Shipbuilding Corporation is visiting troubled Croatian shipbuilder Uljanik’s shipyards in Pula and Rijeka in what Croatian government officials hope will result in a lifeline for the struggling Croatian company.

Uljanik, which owns the Uljanik shipyard in Pula and the 3. Maj shipyard in Rijeka, is in severe financial difficulties. The shipbuilder has lost several vessel construction deals and has seen its bank accounts frozen several times, while its employees went on strike due to unpaid wages.

At the end of March, Prime Minister Andrej Plenkovic said the Croatian government was unable to endorse a proposed restructuring plan for the shipbuilder, with a cost of between HRK7.5bn and HRK10.8bn (€1bn-1.5bn), talking of the burden this would place on Croatian taxpayers.

The Croatian financial agency FINA has asked the court to open bankruptcy proceedings against it, and a decision is expected on June 5.

Meanwhile, Zagreb has been seeking other solutions to the crisis. Plenkovic announced in an interview with the HRT public broadcaster in April that the CEO of the China Shipbuilding Corporation (CSIC) would visit Croatia at the head of a delegation from the company between April 25 and May 10.

The visit was organised after Plenkovic discussed the problems at Uljanik with Chinese Premier Li Keqiang during the summit of 17 Central and Eastern European countries and China in Dubrovnik last month.

“They will visit Pula and Rijeka to see what can be done about their possible engagement or cooperation," Plenkovic said at the time, adding that Zagreb has had “done all it can” to get the Chinese side interested.

Plenkovic met with the CSIC CEO Hu Wenming and other members of the delegation on April 29, saying after the meeting that discussions had been “very thorough and open”.

"We expect that after their visit to Rijeka and Pula, the representatives of this large Chinese company, one of the five most powerful companies in the world, will analyse and discuss the possibilities of possible cooperation or partnerships. I can say that we have made an effort on our side that requires further talks in Pula and Rijeka,” said Plenkovic.

The following day, the delegation from CSIC talked with representatives of Uljanik’s management and supervisory boards, Total Croatia News reported.

According to a member of Uljanik’s supervisory board, CSIC showed interest in Uljanik’s technology and special-purpose vessels. “I am glad to see that there are people interested in both shipyards,” Samir Hadzic said, adding that “when they [the Chinese] will make their final decision, only they know”.