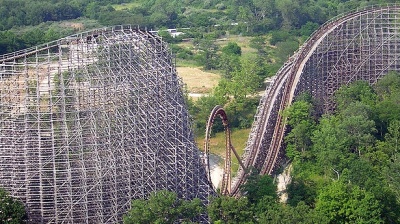 The Turkish lira went on a high-volatility rollercoaster ride on December 13, at one point crashing as much as 7% to an all-time low of nearly 15/$ before ending the day at around 13.80 after the central bank entered the market to sell dollars for the fourth time in two weeks.

President Recep Tayyip Erdogan has doubled down, showing no sign of approving the rate hikes amid soaring inflation that the market is crying out for and insisting that after some pain Turkey will have won its “war for economic independence” and will have become a China on Europe’s doorstep, exporting its way to prosperity on the back of a weaker lira. Critics try to get the message through to him that it took China and other East Asian nations generations to achieve such an economic model, but to no avail. Respondents in a Bloomberg survey of 12 Turkish and foreign investors said they’ve now lost hope that Erdogan will ever stop meddling with monetary policy.

“We don’t believe that Erdogan can ever step back from interfering in CBRT [Central Bank of Republic of Turkey], it is in his DNA,” said Timothy Ash, a senior sovereign strategist at Bluebay Asset Management. “Turkey needs a competent and strong CBRT governor, able to stand up to Erdogan.”

Respondents in the survey said a 500-bp hike was the minimum the CBRT—which will hold a rates meeting on December 16—should bring in to help right the ship, but some called for increases of as much as 1,000 bp, which would take the one-week repo rate to 25%, 4 pp ahead of official inflation of 21%. Despite such calls, the CBRT is expected to move ahead with a policy rate decrease of 100 bp to 14%.

Lately appointed Finance Minister Nureddin Nebati said on December 12 in an interview with Habertuk newspaper that the government was “determined” not to raise rates.

In the meantime, the queues for discount bread provided by municipalities are lengthening and there are frequent price changes in the shops as the Turkish lira (TRY) lurches. The situation could destroy demand, leading to recession, some analysts have warned. Sellers, such as car dealers, often don't want to sell goods for fear of not collecting enough revenues to replenish stocks once prices rise even further.

Looking at how the CBRT on December 13 again intervened in the FX market to assist the lira, Win Thin, global head of currency strategy at Brown Brothers Harriman, told Reuters: "The central bank has continued to intervene to soften the blow but this is akin to putting a band-aid on a gaping wound."

The news agency said that according to calculations of bankers analysing official data, the central bank sold $1.5-2bn in dollars on December 13 alone, after sales worth $2.5bn in the first three intervention efforts.

At its new all-time low, the TRY was worth roughly half what it was at the beginning of the year.

"Last week's apparent relative stability of lira was artificial and non-sustainable. Now we see the build-up pressure unfolding, driving lira weakness to the next level," Commerzbank analysts said in a note.

"Any further attempts ... to stabilize lira by interventions is probably bound to fail," they said.