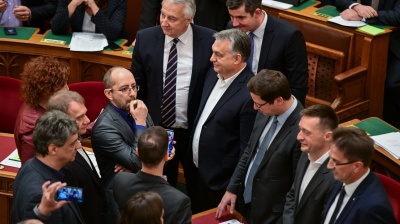 Opposition parties attempted to disrupt voting on the contested labour code amendment dubbed the “slave law” by opponents on December 12, which produced chaotic scenes in the Hungarian parliament, but the legislation was approved by the Fidesz-led majority. Later in the evening thousands of people took to the street. Police used tear gas against protesters in downtown Budapest.

On Wednesday, parliament voted to extend the period employers may account overtime for the purpose of calculating wages and rest days from twelve months to three years, and to raise the upper threshold for annual overtime from 250 to 400 hours.

This would essentially eliminate the need for employers to pay extra for overtime work, as the overtime hours could simply be offset later by off-time work. Labour unions held demonstrations during the weekend and threatened to close down roads and hold mass protests prior to Wednesday's vote.

The governing parties and Prime Minister Viktor Orban said the aim of the legislation was to dismantle administrative barriers to allow employees to earn more through more work on a voluntary basis. Increasing the overtime is only possible with the written consent of employees, they stressed.

In an interview in Wednesday’s edition of business daily Vilaggazdasag, the minister of technology acknowledged that the government adopted the legislation in response to requests from companies. The new rules are widely seen as a concession for multinational companies, especially in the vehicle sector, facing a labour crunch.

At the start of the session, opposition MPs blocked the pair of stairways to the speaker's dais and held up banners on which "Year of Families" was crossed out on one and "Year of Slaves 2018" was written on another.

The house speaker began to chair the session from his own seat rather from the dais, surrounded by Fidesz MPs standing around him, including Orban, amid continued whistling from the opposition, which intensified as the parliamentary guards appeared at the entrance to the chamber.

MPs began to vote on a number of bills apparently without their ID cards, which was invalid, opposition parties said later at a joint press conference. Parliament approved dozens of pieces of legislation during the chaotic session before the contested bill on the labour code, which was passed with 130 vote for, 52 against and one abstention.

The scandal was broadcast live by a number of MPs on social media, including Parbeszed MP Bence Tordai, who approached Orban and his ministers to ask questions about the bill, while holding his mobile in the prime minister’s face.

The parliament floor took on a surrealistic aspect, with MPs walking up and down, whistling, blowing sirens and holding up banners.

Fidesz group leader slammed "Jobbik's hooligans and Liberal anarchists" for their "aggressive attitude" and insisted that the developments "cannot be left without consequences". House speaker Laszlo Kover spoke of an attempted coup.

The co-ruling Christian Democrats said in a statement that Wednesday's session had been "shameful" and insisted that "a politically weak opposition tried to prevent parliament's work through physical force.

The Socialists said Wednesday's session was scandalous and illegitimate and argued that the MPs had been allowed to vote without their IDs, which made it impossible to identify who was voting. Other MP's slammed President Janos Ader, who was present at the session, for failing to prevent the labour law.

Commenting on the passage of the amendments to overtime rules after the sitting, Orban told journalists the law "is a good one and will do good for workers". When asked how it felt to have an opposition MP blow a whistle in his face he said: "In Fidesz, we call that doing one's service for the country".

Protesters take to the streets

Supporters of the opposition parties gathered in front of parliament after the end of the session. The protesters, many of whom chanted "down with the government", marched from the parliament building to Margaret Bridge and then on to Fidesz’ headquarters, blocking traffic. Two demonstrators climbed on a balcony, while others attempted to enter the building.

Some tried to enter the parliament building but the officers thwarted the attempt, using tear gas. The standoff lasted several hours.  According to a police report, two officers were injured when they were sprayed with gas by a protester.

The scandal over the overtime rules overshadowed voting on another contested piece of legislation, the establishment of the public administrative courts, starting operation from January 2020. The legislation strips powers from the Kuria, the highest court in Hungary in administrative disputes, which has been criticised by the EU and other international bodies.

The Orban government planned to establish the courts to deal with issues related to public administration such as elections, police abuse or corruption to taxes in 2016, but this was blocked by the Constitutional Court.

The cabinet tried to dismiss fears that the new court would be packed with judges loyal to Orban’s government, but the judges will be appointed by parliament where Fidesz holds a two-third majority, and the courts will be overseen by the interior ministry.