CHALLENGING ERDOGAN: Another former ally walks out on Turkey’s strongman 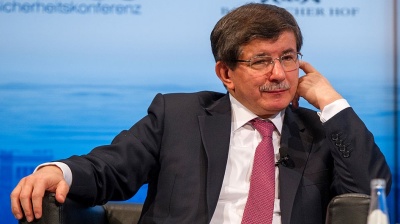 “The AKP ... no longer has the ability to be a solution to our country’s problems,” Davutoglu said as he quit the party.
By bne IntelliNews September 13, 2019

Another former ally of Turkish President Recep Tayyip Erdogan has very publicly deserted the strongman amid Turkey’s economic problems and concern over growing authoritarianism in the country. Former prime minister Ahmet Davutoglu, once seen as Erdogan’s right-hand man, said on September 13 that he has resigned from the ruling Justice and Development Party (AKP).

In announcing his exit, Davutoglu repeated criticisms of its ability to govern and implicitly threw barbs at Erdogan’s governing style.

“The AKP, which has fallen under the control of a small team, no longer has the ability to be a solution to our country’s problems,” Davutoglu, 60, told a press conference in Ankara, according to Reuters.

Five other lawmakers resigned from the AKP alongside Davutoglu.

Davutoglu is seen as something of a bureaucrat rather than a charismatic politician, but, importantly, during his time at the top of the AKP he appointed many of the party’s current provincial heads—some of these officials could end up at Davutoglu’s side, with Erdogan said to be planning to purge any such unreliable individuals from the AKP hierarchy.

Earlier this week, another former member of Erdogan’s team, ex- deputy prime minister and economic czar Ali Babacan confirmed to a Turkish daily that he is set to form a new political party by the end of the year to challenge the AKP.

Like Davutoglu, 52-year-old Babacan refrained from stating he is taking on Erdogan, 65, directly, but given the weakening of parliament’s powers and scrapping of the position of prime minister that took place when Erdogan last year became Turkey’s first executive president in a newly-constituted presidential republic, it is not so much the AKP that the challengers need to dislodge but the nearly-all-powerful president himself.

Once seen as just about invincible, Erdogan finds himself vulnerable to rivals with new ideas—including Ekrem Imamoglu the hugely popular opposition mayor of Istanbul who twice humiliated the president earlier this year by winning a vote and then a ‘revote’ to win the mayorship of the iconic commercial and cultural capital of the country.

While Turkey’s economy was booming many Turks tolerated his assumption of more and more power, authoritarian purges and increasingly tight state control over the country’s affairs. But it is likely that if an election was held right now Erdogan, Turkey’s leader of towards 17 years, would be held responsible by a majority of Turks for the painful crash-landing the debt-fuelled country has endured, starting with last year’s currency crisis.

Line-up of Davutoglu, Babacan and Gul?

Some observers expected Davutoglu to combine his statement on resigning from the AKP with an announcement that he was forming a new opposition party. However, such a declaration was not forthcoming, and there is still the possibility he might join Babacan’s party, though there has been some speculation that Babacan, who is informally working on creating the party with former president Abdullah Gul, is not keen on the idea.

Davutoglu, a professor, has this year faced disciplinary action from the AKP over his criticism of its policies. It was expected that the party would soon dismiss him.

“In order to prevent the AKP’s loyal base from living through the sadness of seeing their own chairman dismissed, we are resigning from our party, for which we gave years of brow sweat and guidance,” Davutoglu, who served as prime minister between 2014 and 2016 before falling out with Erdogan, added at the press conference.

After his re-election last year, and his adoption of the sweeping powers that come with the new executive presidential system, Erdogan named his son-in-law Berat Albayrak as finance minister. Davutoglu strongly criticised the move, remarking that the country did not belong to a person or a family.

Babacan, 52, outlined his intentions in an interview published on September 10 by Karar newspaper. “Values like human rights, freedoms, populist democracy and the rule of law are ones that we always defend and believe in. These principles are not a periodic political preference for us,” he told the publication, adding that the AKP was committed to these values in the past.

“After all these achievements, the condition in which Turkey is currently in truly saddens us. When we look at why it is in this condition, the main reason is that it has strayed from the practice of these values and principles,” he added.

A founding member of the AKP, Babacan resigned from the party in July, citing “deep differences”. Babacan served as economy and foreign minister during its first years in power before becoming deputy prime minister with responsibility for the economy, a role he held from 2009 to 2015. Between 2005 and 2009 he was Turkey’s chief negotiator for accession to the European Union.

Babacan said in the interview with Karar—known in Turkey as a newspaper that became home to former Erdogan-supporting journalists kicked out of pro-government media outlets—that he was working to find like-minded individuals to create a team that could lead the new party.

“This will take some time,” Babacan said. “We want the party to be formed before 2020. The quality is very important here.”

Babacan also talked about how Turkey’s economy needed to emerge from a spiral and, given the plentiful liquidity in world markets, to “urgently” lower its risk premium. The erosion of the judiciary and some foreign policies under the present administration were partly to blame for the economic problems, he said.

The response of Erdogan to the new challenges to his authority is awaited. Shortly before the Babacan and Davutoglu moves he warned AKP members that those who “get off this train will not be allowed back on”.

In Sivas, central Anatolia, the president told party faithful. “If we keep our brotherhood strong, then seeds of unrest can’t grow. Those who wanted to harm the AKP for their own political ambitions and aspirations have always been disappointed.”

Dissent in the ranks, though usually not public, has not been that hard to come by since the party suffered embarrassment in Ankara, Istanbul and other cities during the spring local elections. Turkey’s next elections are not scheduled until 2023 but there is some speculation Erdogan might try to use the credit taps to secure an economic bounce that he could exploit in snap elections. The strategy would be to consolidate his presidency before an opposition party has a chance of riding a wave of popular support.