Growth has passed its peak across most countries in Central and Southeast Europe, with most of the region expected to make a gradual slowdown, says a new report from the Vienna Institute for International Economic Studies (wiiw).

The growth is led by two economies, Romania and Turkey, both of which are overheating, according to wiiw analysts, who anticipate a sharp slump in growth this year. 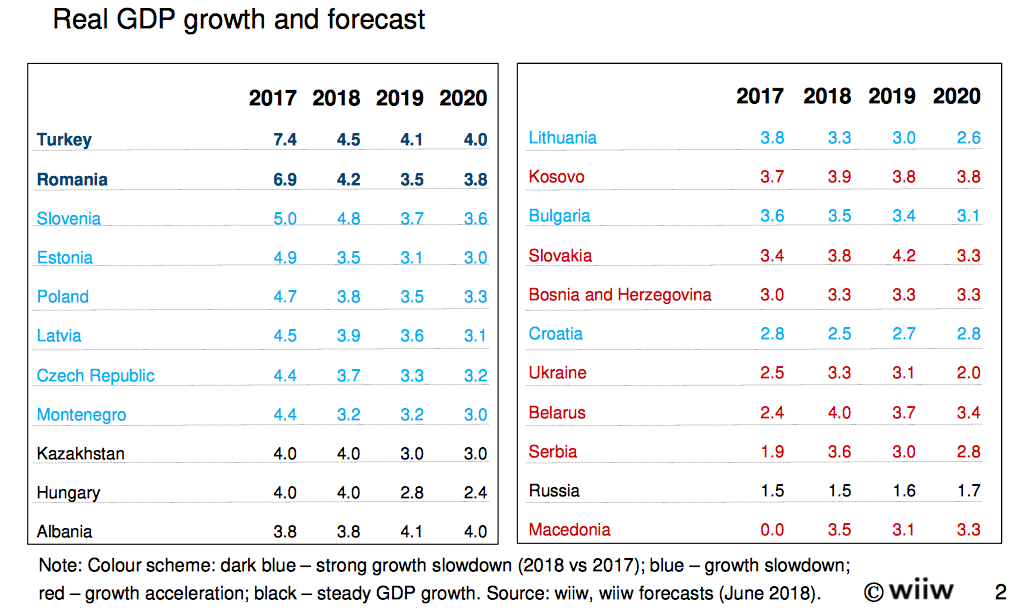 Several other countries from across the region are expected to see a more modest slowdown this year; growth will fall compared to 2017 in Bulgaria, Croatia, Czechia, Estonia, Latvia, Lithuania, Montenegro, Poland and Slovenia.

Looking at the reasons for the declining growth rate, wiiw economist Vasily Astrov told a webinar on June 28 that there are two main factors behind the expected fall in private consumption, which has been one of the main drivers behind the boom of recent years.

“The other is the increase in remittances abroad primarily to Ukraine, because Central European countries, especially Poland and the Czech Republic are increasingly relying on imported labour given their growing labour shortages at home. … The increase in remittances sent home by Ukrainians abroad has a minor negative impact on the dynamics of private consumption in host countries especially in Central Europe.”

4mn Ukrainians have taken advantage of the visa-free regime introduced by the EU last June to go abroad to find work, including an estimated 2mn temporary Ukrainian workers in Poland alone. Consequently, Remittances to Ukraine from citizens working abroad continue to rise and are expected to top $10bn this year, the National Bank of Ukraine (NBU) said on June 21.

Not all countries in the region are expected to see declining consumption this year, but this is attributed to country-specific reasons that defy the broader trend. Macedonia and Kosovo, for example, have recently emerged from political crises, and consumer confidence has stabilised as a result. Bosnia & Herzegovina, Kazakhstan, Serbia and Slovenia have all experienced fiscal loosening, while reforms to Estonia’s income tax regime have increased households’ purchasing power.

On a more negative note, “in many countries once could observe clear deceleration of export dynamics in past few months,” said Astrov.

This has been caused by a combination of currency factors — the Czech korun, in particular, has appreciated substantially in the past year, while the Baltic states’s export competitiveness was impacted by the fall of the Russian ruble against the euro. 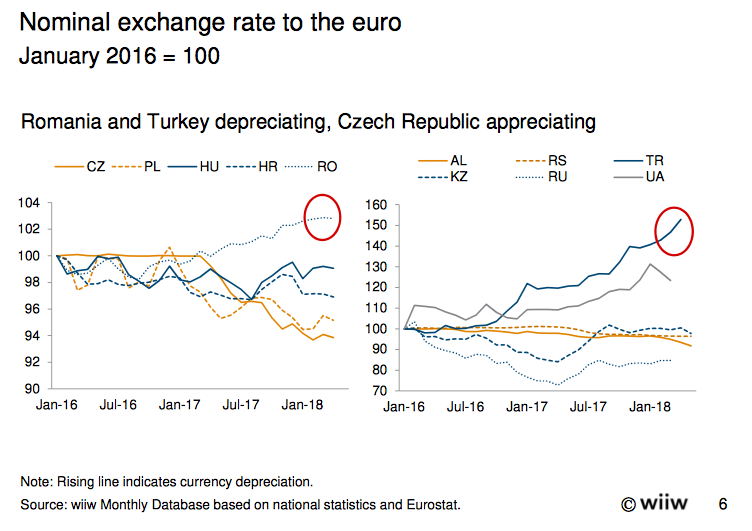 Added to this is the “the economic slowdown in the euro area [which] is dampening the export development of many EU-CEE countries; protectionist tendencies, especially in the United States, may also play a role,” says the report.

Investment remains strong, but looking to the longer-term the EU member states from Central Europe can expect a fall in EU transfers under the next EU budget. The current draft put forward by the European Commission on May 29 envisages severe cuts in cohesion funding that will fall heavily on the Visegrad Four and Baltic states.

“Of course this is a proposal and some countries especially Poland reacted extremely negatively said they would not accept this. The new budget needs unanimity so there will be further negotiations, and we think most likely there will be some sort of a compromise,” said Astrov.

"In the end, the cost to most CEE countries will be not as high as suggested by the Commission in the current proposal, but there will be some cuts.”

By contrast, wiiw sees the Western Balkans region as becoming more attractive to investors as costs rise in Central Europe and the region experiences growing labour shortages. The Western Balkans is also expected to receive large amounts of investment from China within the framework of the Belt and Road Initiative (BRI).