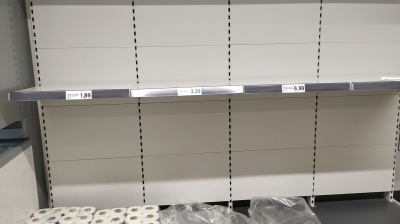 Empty shelves in one Sofia supermarket as residents stock up on toilet paper and other essentials.
By Denitsa Koseva in Sofia March 14, 2020

Bulgaria’s health ministry on March 13 ordered the closure of all schools, kindergartens, restaurants, and sports and entertainment facilities until March 29 as part of the measures to slow down the spread of the Covid-19 coronavirus.

A few hours earlier, the parliament voted to declare a state of emergency, giving the government extraordinary rights to partially limit people’s freedom in an attempt to stop the virus.

The country has already confirmed 30 cases of coronavirus, most of them in the capital Sofia.

All stores except those selling food will also stay closed until March 29. Open markets will also stop working.

Bulgarians were banned from visiting their doctors for regular examinations. All planned medical interventions and consultations with doctors are also stopped for the coming two weeks.

In response to the crisis, Bulgarians stockpiled groceries, emptying all big stores and waiting for hours in queues, as they felt uncertain about what will happen in the coming days. 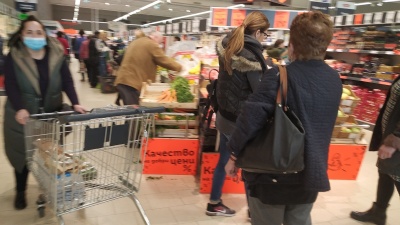 The government also adopted tougher measures for those who do not stay under quarantine as ordered, including significant fines and jail sentences.

President Rumen Radev issued a statement supporting the tougher measures for limiting the spread of the coronavirus, but added that they should be “adequate and legal”. Radev added that the government should also adopt a package of economic and social measures.

Meanwhile, the Bulgarian Helsinki Committee issued an open letter asking for guarantees that the state of emergency will not continue after April 13 and that the extraordinary measures adopted for that period will no longer be in force after that.

One of the most affected economic sectors – the tourism industry – announced the collapse of its revenues and asked for government’s help. The number of early reservations sank by around 80%, according to their estimations. Tourism Minister Nikolina Angelkova said that the government is working on a law that would allow state aid for the sector.