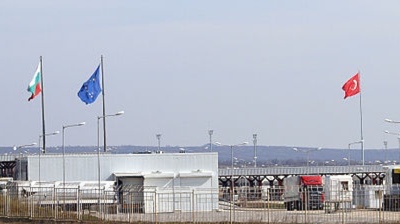 The Lesovo-Hamzabeyli border checkpoint between Bulgaria and Turkey.
By Denitsa Koseva in Sofia March 1, 2020

Bulgaria’s defence ministry said on February 29 it is sending additional gendarmerie to the border with Turkey due to the increased attempts by migrants to travel from Turkey to Bulgaria and Greece.

The country has decided to tighten the control after reports from Turkish media on February 28 that hundreds of migrants were heading to Turkey's borders with Greece and Bulgaria as Ankara had decided not to stop Syrian refugees from reaching Europe.

According to an agreement between Turkey and the EU from 2016, Turkey restricted migration flows from Syria and other countries to Europe. In return, the EU pledged to provide €6bn to Turkey to deal with Syrian refugees.

Despite the reports in Turkish media, Bulgaria’s interior ministry said that only isolated attempts to illegally cross the border were registered. However, Bulgaria’s Prime Minister Boyko Borissov immediately contacted Turkish President Recep Tayyip Erdogan. On March 2 the two leaders will meet to discuss the situation.

Upon the request of Interior Minister Mladen Marinov, on February 29 Defence Minister Krassimir Karakachanov ordered 350 troops to be ready to assist the border police if necessary, the defence ministry said in a statement.

Meanwhile, the European Commission is ready to provide additional assistance to Bulgaria to secure its border, news outlet Dnevnik reported.

The country can rely on financial assistance and on deployment of additional teams of the European Border and Coast Guard, Frontex.

According to Dnevnik, the EU has not yet received formal confirmation from Turkey that the deal is no longer in force.

Countries to the north of the Balkan peninsular are also readying for a new wave of migration.

Croatia’s Interior Minister Davor Bozinovic said on February 29 that Zagreb is prepared but that there has not yet been any increase in arrivals along the Western Balkan route.

“[P]erhaps unlike some other countries, these situations are not a surprise to us because we are constantly in full operational function," Bozinovic added.

The Slovenian authorities have also said they are prepared for a possible increase in migration, as reported by state news agency STA.

Turkey has said that at least 33 of its soldiers had died in a Syrian government attack in the northwestern Syrian province of Idlib, according to Radio Free Europe. In response, Turkey, which backs Syrian rebels, hit 200 government targets.