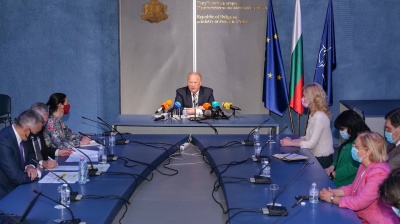 Bulgaria’s foreign affairs ministry has set resuming dialogue with North Macedonia and restoring trust between the two states as its top priority, Foreign Minister Svetlan Stoev said on May 25 when presenting his team.

Relations between the neighbouring states have worsened dramatically after Bulgaria blocked the start of EU accession negotiations with North Macedonia in December.

Bulgaria’s caretaker government took office on May 12 and said it has no authority to cancel the ban imposed by the previous cabinet on the start of talks between the EU and North Macedonia. However, the country has been under significant international pressure to find a compromise.

“We are opened for dialogue,” Stoev said.

He added that the goal is to achieve sustainable and irreversible results in restoring the trust between the two states.

"What is needed in our relations is, on the one hand, consistency and, on the other hand, a constructive attitude in the bilateral dialogue. The goal is to achieve sustainable and irreversible results in restoring trust between the two countries," said Stoev, according to a foreign ministry statement.

Bulgaria blocked the EU membership negotiations with Skopje as it wants North Macedonia to accept that the Macedonian language is a Bulgarian dialect and that the Macedonian nation was artificially created in 1944, and to admit that there is no Macedonian minority in Bulgaria. It also insists on the rewriting of history textbooks.

Earlier in May, Sofia rejected the EU proposal for solving the dispute with North Macedonia and opening a way for the Balkan country to start EU accession talks, saying that there is nothing new in the document.

In another sign of warming relations, the presidents of both countries, North Macedonia’s head of state Stevo Pendarovski and his Bulgarian peer Rumen Radev, will visit Rome together on May 27 to pay homage to apostles St. Cyril and Methodius. They will lay wreaths at Santa Maria Maggiore Basilica where Pope Adrian II blessed the books and alphabet created by the two brothers.

However, a statement from Russian diplomats to mark the celebrations of the Day of Saints Cyril and Methodius risked stirring the conflict between Bulgaria and North Macedonia.

The Russian embassy in Skopje congratulated North Macedonia on the holiday in a tweet quoting President Vladimir Putin.

“We congratulate the brotherly Macedonian people the Day of Saints Cyril and Methodius, which is celebrated as a national holiday. Today in Russia is a solemn day — the Day of Slavic Literacy, the literacy that came to us from the Macedonian land — Vladimir Putin,” the embassy said.

The Russian embassy added another tweet saying that “It is impossible to overestimate the importance of Saints Cyril and Methodius for the development of the Slavic languages, including Russian and Macedonian. It is difficult to imagine many of the greatest treasures of the world literature without the alphabet we use thanks to the Thessalonian brothers.”

“This is one of your most disgraceful falsifications and the most pathetic. Literacy and Orthodoxy came to Russia from Bulgaria and this is a fact. The Macedonian alphabet was created together with the Macedonian nation in Moscow in 1945,” he wrote in response to the Russian tweet.

The incident gave rise to speculation that Moscow could be trying to reignite the conflict between Sofia and Skopje with the aim of preventing North Macedonia progressing towards EU membership.