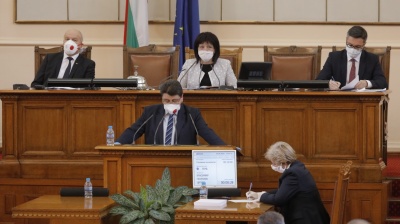 Bulgaria’s parliament on April 3 approved an extension of the state of emergency by one month until May 13 as requested by the government and also adopted the proposed budget revision.

The government requested an extension of the state of emergency, which was declared on March 13 following the coronavirus (COVID-19) outbreak. The number of reported cases is still growing at a slow pace and on April 3 reached 485, with 14 deaths and 30 cured.

The government has explained its request with the need to ease the pressure on the healthcare system. However, critics of this decision claimed there was no solid arguments for the government’s request.

Some opposition MPs have suggested extending the state of emergency until April 30 when the situation should be re-assessed, but that proposal was not accepted.

Meanwhile, two more MPs have tested positive for coronavirus, including Daniela Daritkova, the leader of the parliamentary group of the ruling Gerb party, and another Gerb MP.

Prime Minister Boyko Borissov said that the peak of infections is expected in the next two or three weeks. He also said that the government will ease the restrictions when the infection rate declines for three consecutive days.

The parliament also approved the proposed budget revision, setting the end-year projection at a 2.9% deficit from previously expected balanced budget. It also allowed the government to issue BGN10bn (€5.3bn) debt instead of the previously planned BGN2.2bn.

According to the revision, the government is expecting a deficit of BGN3.5bn (€1.8bn) versus a balanced budget according to the initial plan. Adding to that sum the BGN700mn the government has decided to provide as state guarantees to the Bulgarian Development Bank (BDB) to help businesses affected by the COVID-19 pandemic, the total deficit becomes BGN4.2bn.

The government expects BGN2.44bn lower budget revenue due to the coronavirus-related measures aimed at helping businesses to survive during the crisis.

Among the measures aiming to help the economy face the consequences from coronavirus will be a moratorium on loan repayments. On April 3, the central bank said it has asked local banks to propose a set of rules on a moratorium as recommended by the European Banking Authority (EBA). Banks were given five days to come up with rules.

The rules should be approved by the central bank and would allow central banks to offer loan repayment reliefs for a certain period.