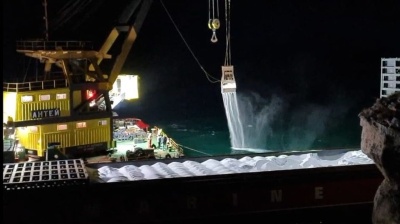 Bulgaria’s caretaker Environment Minister Assen Lichev ordered a halt to an operation to unload a stranded ship transporting nitrogen fertilisers on September 28.  Lichev said the operation, which began late on the previous day, was causing significant contamination of the sea and the nearby land.

The Vera Su got stuck on rocks off the Bulgarian coast at the Yailata protected area earlier in September and started leaking part of its cargo, which could endanger the sea life in the area. The leaks of the nitrogen fertiliser, which causes harmful algal blooms, eutrophication and sea dead zones (hypoxia), were confirmed by the environment ministry late on September 27 after tests of samples.

The spills are contaminating an area that is part of Natura 2000 and is important for a significant part of the biodiversity in the Bulgarian part of the Black Sea.

In his order, Lichev said that the unloading procedure was not executed as agreed with the local authorities and a large amount of fertiliser was falling into the sea.

An environmentalist NGO, To Preserve Coral, posted a video on its Facebook page showing the spills. The footage filmed during the night shows white powder showering down from a crane.

“The spill of the cargo in the Black Sea is observed during rowing [of fertilisers] from the stranded ship to the other vessel,” Lichev noted.

“The applied method of unloading is radically different from the one approved by the MoEW [environment ministry],” Lichev said in the order.

He explained that during a meeting with the institutions responsible for carrying out the rescue operations, held late on September 27, it was decided that 700 tonnes of the ship's bulk cargo would be packed in bags of one tonne each. The ministry approved the unloading of the cargo through canvas decks, filled with a grapple on board the ship through a special funnel. They were to be transferred by crane to the barge. The packaged cargo would then be transported by barges with enhanced safety measures for the marine environment.

The ministry insisted that the local authorities must stretch a sail between the stranded ship and the barge to prevent possible contamination, however, this instruction was not carried out.

In an angry comment on Facebook Lichev, who has been a prominent environmental activist for years, accused the last regular government of Boyko Borissov of leaving behind it an “incapable and irresponsible” administration, which led to the botched operation.

Borislav Sandov, co-leader of the Green Movement party, also commented on the operation, saying the contamination was not expected.

“With this sprinkling and with this wind, damage to part of the land is guaranteed. I am shocked by the sight,” Sandov wrote on Facebook.

The environment ministry will resume the operation once a technology that would guarantee environmental safety is implemented.