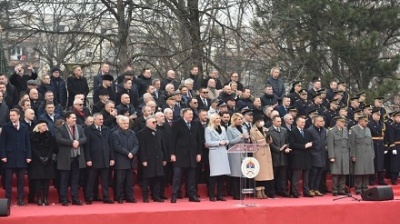 Serbs in Bosnia & Herzegovina marked the 30th anniversary of the creation of Republika Srpska on January 9, despite an earlier ruling by the country's Constitutional Court that the January 9 celebration is unconstitutional and illegal.

The controversial celebration took place at a time when Bosnian Serb politicians are seeking to remove Republika Srpska from state-level institutions, prompting fears about the potential breakup of Bosnia.

Celebrations of the anniversary started on January 8, with flowers being laid on various monuments dedicated to soldiers who fought for Republika Srpska and with the first international guests arriving, including Serbian Parliament Speaker Ivica Dacic, the patriarch of the Serbian Orthodox Church Porfirije, Serbian Prime Minister Ana Brnabic and Russian ambassador Igor Kalbukhov.

Republika Srpska Day was marked by a parade of police forces, sports clubs and other organisations in Banja Luka. Bosnian Serb political leader Milorad Dodik, who is the Serb member of the country's three-member presidency, said after the parade that “RS is our state, no matter what anyone thinks of it.” He ended his speech with the words: “Long live Republika Srpska, long live Serbia.”

In November 2018, the Constitutional Court declared the holiday unconstitutional. It said the holiday is discriminatory against non-Serbs in Republika Srpska because January 9 is also a Serbian Orthodox religious holiday, St. Stephen's Day.

Bosnian Serbs rejected the decision and organised a referendum in September 2016, in which a majority of entity citizens voted for the holiday.

This year’s celebration took place just days after the US imposed new sanctions on Dodik and the Banja Luka television station Alternative Television (ATV) for corruption and threats to the stability and territorial integrity of Bosnia & Herzegovina.

In a statement, the US Treasury Department accused Dodik, who is already under US sanctions, of corruption and a threat to the stability and territorial integrity of Bosnia.

In December, the National Assembly of Republika Srpska adopted a non-binding decision to withdraw from the armed forces, the judiciary and the state's tax system.

This followed repeated threats from Dodik, the former president of the entity, that it would quit the institutions, seen by observers as a step towards the breakup of Bosnia, and potentially leading to another war in the country.

On January 9, 1992, Bosnian Serbs proclaimed Republika Srpska as their republic in Bosnia & Herzegovina. Other peoples in Bosnia, Bosniaks and Croats, see the event as the precursor to the 1992-1995 war that took 100,000 lives and the return of genocide to European soil in Srebrenica.

The political party Nasa stranka from Sarajevo said that January 9 cannot be the Day of Republika Srpska because the Constitutional Court and the Venice Commission also have said so. “Celebrating a self-proclaimed republic led by convicted war criminals means hitting the bottom of civilisation,” the party said in a statement.