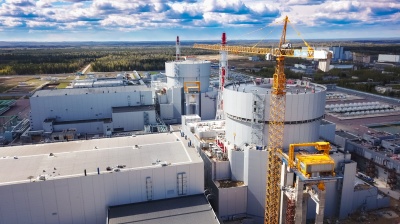 Rosatom aims to build the first nuclear reactor in Saudi Arabia as part of the company’s global drive to break into emerging markets for atomic energy.

Russian Deputy Prime Minister Alexander Novak said that Rosatom had submitted a bid to the Saudi authorities on December 13, saying that he hoped the countries would work closely together on building a nuclear power plant (NPP) and also on using nuclear technologies for peaceful purposes.

"The documents have been handed in for the tender on the NPP’s construction in Saudi Arabia," Novak said, Tass reported.

Rosatom CEO Alexey Likhachev said at the end of 2021 that Rosatom, which unites a number or Russian state-owned nuclear companies, would take part in Saudi Arabia’s nuclear tender, explaining that Saudi Arabia was an important partner for Moscow.

Nuclear is a major tool of Kremlin industrial power, and Rosatom is already building nuclear reactors in Egypt and Jordan in the Middle East, while it is also constructing NPPs in India, Bangladesh and China.

The Kremlin has recently insisted that EU sanctions against Russia have not affected Russia’s global nuclear operations in any way.

Rosatom said that such restrictions would not pose a problem for the financing of the Akkuyu NPP in Turkey, which the Russians are financing and building.

“The plant is being built on a build-own-operate model and that Russia is solely responsible for project financing,” said Kirill Komarov, the first deputy director-general of Rosatom, adding that it is fully funded for the next few years.

Rosatom has 23 orders for reactors in eight countries and intergovernmental agreements on 34 more.

Novak also said that Moscow aimed to boost the share of nuclear energy in Russia’s total energy balance to 25% by 2040, up from 20% today, by developing a new generation of smaller reactor technology that is mobile and can be installed on ships and barges.

"As of today, the share of nuclear generation in Russia stands at around 20%, whereas in the European part [of the country] it is almost 40%, this being the largest source of clean energy nationwide. Russia intends to boost the share of nuclear energy in the country’s total energy balance to 25% by 2040," he said, writing in Energy Policy magazine, Tass reported.

Russia also aims to take a 20% of the global small-scale nuclear reactor market by 2030, he said.

In 2021, the construction of the lead coolant BREST-OD-300 fast reactor was started as part of the "Breakthrough" project, which aims to develop reactor technology that can re-use spent nuclear fuel again and again.

Such reactors, of up to 50 MW, are suitable for use in remote regions that do not have access to power networks. Small reactors are often housed on repurposed ships that can be sailed to locations on the northern Arctic coast.

"This will allow spent fuel to be re-used an infinite number of times, solving the issue of costly spent nuclear fuel storage. By 2030, Russia's share of the global market for low-power nuclear plants is expected to reach 20%," Novak explained.

Russia is one of the leading global developers of such low-power reactors, he noted.

Russian projects include the RITM-200 modular reactor being developed in Yakutia for the exploration of the Kyuchus gold deposit. In addition, an agreement has been reached to construct four floating power units for the development of the Baim ore zone in Chukotka.

"This is the first electrification project of an industrial cluster in the world using floating nuclear power plants. A new extra mobile and universal microreactor Shelf-M is being developed," Novak added.