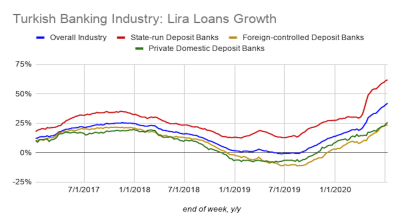 US-based BlackRock—the world’s biggest money manager with around $7.3 trillion in assets under management as of end-June—has trimmed some exposure to Turkey because of the economic trajectory expected there in the next few months, Gordon Fraser, co-head of global emerging markets equities at the investment management corporation, told Bloomberg on July 19.

Fraser has also taken profits in Chinese stocks following their recent historic rally while he is now betting on stocks in Indonesia, India, Russia and Mexico. He sees these four countries—among the worst hit by the coronavirus (COVID-19) crisis—as having sustainable levels of debt and notes their floating exchange rates.

Fraser also said he remained cautious on Brazil due to its fiscal position while he was underweight in Taiwan and South Korea since they have already outperformed.

The foreign-held share of equities listed on the Borsa Istanbul fell to 49.18% as of July 20 at market close, Is Invest’s daily shares bulletin showed on July 21.

One option is for local lenders to transfer their government papers to Euroclear’s omnibus account opened at Turkish clearing and settlement bank Takasbank. That would help to disguise the awful reality of the domestic government bonds market, with the foreign-held share of the bonds headed for zero.

“One consequence of very depressed activity in EMs is that current account deficits are likely to have narrowed in many countries, reducing reliance on capital inflows to finance domestic spending. So while portfolio flows are likely to swing with the vagaries of risk appetite, few major EMs look vulnerable to a period of destabilising capital outflows in the coming months,” Edward Glossop of Capital Economics wrote on July 20 in his Emerging Markets Capital Flows Monitor.

“One exception is Turkey, where the current account deficit has widened sharply in recent months as tourism receipts have collapsed and policymakers have tried to shore up activity by pumping the economy with credit. A recovery in tourism receipts should narrow the current account deficit over the coming months, but Turkey will remain one of the most vulnerable major EMs to balance of payments strains,” he added.

“Recessions will shrink current account deficits drastically, reducing EM external financing needs and vulnerability. However, external amortization remains a risk for some. Some countries, like Brazil and Mexico, have good buffers; instead, their critical problems of growth and fiscal outlook are more of a ‘domestic’ nature. South Africa, Turkey, and Ukraine are the most vulnerable, as reserve buffers are thin and their general outlooks are tough,” the Institute of International Finance (IIF) said on July 21 in a research note entitled “EM External Vulnerability under COVID-19”.

Turkey has the widest current account deficit and external financing needs in the IIF coverage.

The IFF sees the Turkish lira (TRY) as overvalued while it has noted that “a backloaded amortization schedule in the next twelve months eases near-term pressure in Turkey, but the trade-off policymakers face between growth and external stability is as acute as ever”.

On July 21, Simone Kaslowski, chairman of Turkey’s biggest industry and business group TUSIAD, said that bankruptcies in Turkey were set to increase in what’s left of 2020 with economic growth remaining supressed despite a revival in June.

TUSIAD expects a 2% contraction in Turkey’s GDP this year although the government seems determined to release slightly positive growth data as it did for 2019 despite that year’s currency crisis-induced recession.

Kaslowski also urged the government to return to free market principles to draw back foreign investment.

Turkey’s foreign currency reserves have shrunk significantly and foreign investment is in decline because the authorities are trying to keep interest rates low and the currency strong, he said.

A further decline in the central bank’s reserves risks increasing market turbulence, according to Kaslowski.

Kaslowski also advised the government to abandon the policy of taxing imports to protect domestic companies.

Tariff hikes increased costs and reduced Turkey’s ability to compete internationally as intermediate goods accounted for around 70% of total imports, he added.

On July 13, Bulent Kilicer, general manager of Honda Turkey, told local daily Sozcu that the Japanese carmaker’s plant in Turkey was for sale.

Honda will shut down the plant in September next year.

On July 20, local business daily Dunya reported that small merchants and service companies as well as organised retailers were in trouble due to the ongoing damage caused by the pandemic.

An advisor to Ukrainian President Volodymyr Zelenskiy, Serhiy Shefir, was unharmed in an assassination attempt on the 22 September outside Kyiv. His driver, however, was struck by three bullets and hospitalised in a critical condition.

A very public war of words is raging between the current and former leaders of Albania’s main opposition party, the centre-right Democratic Party.