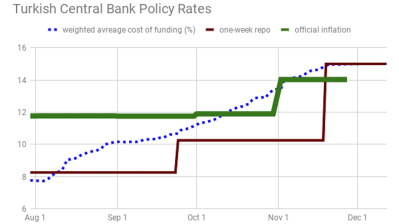 The Turkish Statistical Institute (TUIK, or Turkstat) on December 3 surprised the market by announcing that official annual inflation reached 14.03% y/y in November, compared to the forecasts for between 12.3% and 13.08% made in a Reuters poll with a median estimate of 12.6%.

All eyes now turn to the next monetary policy committee (MPC) meeting to be held on December 24.

There were already market calls for further hikes in the policy rate—booted up 475bp to 15% by Turkey’s new economic management team on November 19 after President Recep Tayyip Erdogan, confronted by a crumbling Turkish lira (TRY) and decimated FX reserves, fired his central bank chief and accepted the resignation of his finance minister and conceded he would accept “bitter pill” monetary policy—and they will now strengthen following the inflation release.

It might be challenging for the finance ministry and central bank to continue with their “market friendly” story should another rate increase not be forthcoming. As things stand, foreign investors are okay with the story sold by officials but locals—who widely see the inflation figures as faked and nowhere near the price reality they see in their daily lives—are yet to show any renewed belief in the lira and are pretty much sticking to gold and hard currency when it comes to stashing away any savings they can. Might a push be under way to close the gap between official and actual inflation to restore some faith among Turks in the national currency? Or does that scenario have little credibility given what has been seen over many years from the Erdogan administration?

If officials wary of more monetary tightening think they can argue to investors that they are still up by a percentage point in terms of the interest rate margin above inflation and that the gain will widen in coming months because inflation is set to fall, they might want to think again.

Frankly speaking, having thrown too many dubious figures at observers in recent years, Turkey by now has a real problem being believed on anything it claims to have quantified with official data. The country’s revamped official coronavirus (COVID-19) numbers—officials now provide the figures on asymptomatic cases as well as symptomatic cases (how decent of them, how kind) but won’t give a figure for overall cases since the country’s Covid ordeal officially began in March (not so decent, not so kind, but hey, who wants to go leaping up the world table for rona infections, let’s leave the title to Trump)—still do not correspond with the pandemic turmoil the country is battling with. Test result figures suggest the real number of new cases recorded per day is twice what officials now say it is, Turkish Medical Association (TTB) head Sebnem Korur Fincanci reasserted on December 2.

On December 3, the Inflation Research Group, led by Istanbul academics who are attempting to determine how accurate (or inaccurate, more to the point) Turkey’s inflation data are, released calculations showing monthly inflation in November was 3.43% versus the 2.3% figure put out by the TUIK. ENAG has been providing its alternative data since September.

Hence, although the official inflation data is still useless when it comes to planning and pricing, it can be seen as a communication tool used by the Erdogan regime to inform the market on the future direction of the interest rate return.

So a tamed, or at least tamer, Erdogan does not look set to surprise market players by not green-lighting any interest rate increase on December 24. A hike of at least 1pp would likely help Turkey keep its latest alliance with the market on track. Any higher hike would demonstrate Erdogan’s commitment to more portfolio inflows. A no-hike case would invite the return of market stress.

The TUIK’s November inflation figure breaks higher than the upper bound of the central bank’s latest forecast range, which was published pre-November 6, the day Erdogan defenestrated the regulator’s governor and put the word out that he’d only just been informed that most of the central bank’s FX reserves had been burnt to a cinder. It was on October 28 that the ill-fated then central bank governor Murat Uysal released an end-2020 inflation forecast range of 11.1-13.1%, with a mid-point of 12.1%.

From the latest vantage point, once they get around the December 24 corner, the Turkish markets may have a joyful January but February may see a dismal downturn.

January 20 should see Joe Biden removing Donald Trump’s greasy FishMac wrappers, stale fries and dreary MAGA baseball caps from the corridors of the White House as he takes over at the Oval Office.

As things stand, the message is that the Erdogan and upcoming Democrat administration are getting ready to work together but the Countering America’s Adversaries Through Sanctions Act (CAATSA), which could be activated over Ankara’s acquired Russian S-400 missiles, and the Halkbank Iran sanctions-busting case that has reached a New York court, hang over Erdogan’s head.

The US Congress’ 2021 budget process will mean a critical juncture when it comes to possible S-400 penalties as the federal budget legislation in the pipeline includes CAATSA sanctions aimed at Turkey. There is a bit more breathing space for Halkbank. It is due back in court on March 1.

Erdogan may hope all these troubles can be eliminated if he manages to find a role important to the Biden game plan.

Erdogan after all served a key role in the Obama administration’s Syria War strategy when it was launched in 2011. Biden was vice president at the time.

Another notable date is January 21, when Turkey has another scheduled MPC meeting.

For imminent events, look to December 10-11 when a summit of the German Union (GU, sometimes referred to as the EU) takes place. There’s been an awful lot of talk that the bloc is this time serious about hitting bully in the backyard Erdogan with meaningful sanctions. But believe it only when you see it. Germany, Turkey’s largest trading partner and ever fearful of the millions of migrants Ankara could send Europe’s way, is again urging a ‘constructive’ approach to an “important partner”. However, some summit talk might be shaking up the headlines if it coincides with some lira volatility. Calls for a rate hike might grow louder.

Given that Erdogan’s current coalition with the market is supposed to help him enjoy a smooth path through the possible global market shake-up in February, curious onlookers will watch for how long he can bear keeping his policy rate high.

Another difficulty not going away any time soon is the pandemic. Such is the dismay in Turkish society over how bad all things Covid have become, Erdogan this week had to agree to some limited lockdowns applied to evenings and weekends. Although seen as useless in reversing the course of the outbreak, the measures will have a huge impact on swathes of economic activity.

There are millions upon millions of Turks who have suffered worsening economic woes since the first virus wave rose to damaging heights in April. They have simply survived on bank debt.

Higher interest rates friendly to the market but a bind for the consumer, along with more obstacles now being put in the way of accessing bank debt and the hits to income amid the health and economic crisis are combining to add to the stress.

Ordinary Turks right now have no democratic way they can obtain a change in economic policy favourable to them, but Erdogan will keep one eye on his public support—what polls are available indicate his support is below the 30%-level—as he conspires to avoid permanent damage to his standing.

There’s no doubt about it. Erdogan is losing support among his base and his practical alliance with the US Democrats may not be enough for him to survive as a puppet dictator.

Meanwhile, Turkish lira deposit rates, subject to a 5% deposit tax for the most popular maturities of up to three months, remain rotten and can play no role in curbing the ‘goldollarisation’ seen as the only option by so many Turks.

The palace never lacks for lickspittles and right now they are busy selling the idea that “the people” see actual inflation at a minimum 15%. But go down to the fork in the road that we have reached and you will find mainstream pundits talking of a minimum 30%.

There are those who insist on teaching the definition of inflation to Turks, but they live in a nation that has suffered from hyperinflation for centuries.

The TUIK should have known better than to put out inflation figures that until now remained in the narrow band of 11-12% throughout 2020 because even the mainstream talking heads do not have the nerve to claim that Turks on the street are coming to foolish conclusions and that they need to understand that inflation is calculated according to high-level mathematical processes that they will never grasp.

But we can calculate that, following the November inflation release, the earliest chance the officials have to make the case that inflation has fallen into the single digits will come in May, ceteris paribus and as long as Erdogan does not attempt to push his luck.

The May inflation reading will be released on June 3, but Erdogan may launch a rate-cutting process as soon as March.

The course seems set, but the volatility is high. Watch out for any external shocks apart from a global market fluctuation in February that might hit Turkey’s currency in the months ahead.

BEYOND THE BOSPORUS: Pa! Sanctions, schmanctions!