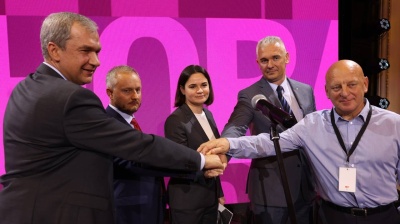 Tuesday, August 9 was the second anniversary of Belarusian strongman Alexander Lukashenko declaring victory in his country's 2020 presidential elections with the support of 80% of the voters. The elections were immediately called out as fraudulent by the Belarusian opposition and Western governments. Belarusians tried to make their voices heard through peaceful protests, but were met with a brutal and violent crackdown by the Minsk regime.

To commemorate the day, several Western capitals released official statements condemning the Minsk regime’s jarring crackdown on the Belarusian opposition and declaring support for their cause.

The US State Department imposed visa restrictions on 100 Belarusian officials for “undermining or injuring democratic institutions or impeding the transition to democracy in Belarus.” Ukraine terminated a co-operation agreement with Belarus’ interior ministry signed in 1992.

In response, Belarus’ Ministry for Foreign Affairs released a statement “absolutely” condemning “Western interference in the internal affairs of Belarus.”

It’s important for Western capitals not to lose track of the Lukashenko regime’s human rights abuses, something which the regime has been more than helpful with by aiding Russia in its invasion of Ukraine and by stopping at nothing to create an even more authoritarian society.

The question now is: how will the exiled opposition manage to maintain its relevance?

The goals of Belarus’ exiled opposition

Exiled Belarusian opposition leader Svetlana Tikhanovskaya has repeatedly made the exiled opposition’s goals clear: All political prisoners must be released; new elections must be held; and, adding a more recent demand, the war in Ukraine must be brought to a just end.

According to Tikhanovskaya, neither Belarus nor Ukraine stands a fair chance of becoming a stable democracy as long as Vladimir Putin is in power. She believes that the Kremlin taking a firm grip on the Lukashenko regime was the first step in its plan to bring the former Soviet states under firm Russian control.

As per Tikhanovskaya’s own words, the results of the war in Ukraine “will give Belarus and Belarusians a chance to move on to the next stage and to put the country on track toward democracy.”

Nevertheless, while Russia’s war in Ukraine might be stopped, it doesn’t necessarily mean that Putin will be ousted from power. Moreover, while Ukrainians are also more in favour of joining the EU and Nato, Belarusians are more interested in remaining neutral or integrating with Russia. Therefore Tikhanovskaya still does not rule out future co-operation with Moscow.

In the longer term, Tikhanovskaya’s office has devised the “Peramoga plan” – a plan to overthrow the Lukashenko regime once and for all with a civil coup. Allegedly, thousands of Belarusians have signed up for this via an anonymous chatbot – and at an unspecified moment, the volunteers will receive a text message with instructions on what to do.

Different factions exist within the exiled opposition, and they don’t always get along, with some accusing others of hoarding financial support from the West for personal gain while doing little to nothing to appeal to the people living in Belarus.

Some parts of the opposition want to focus on armed rebellion in Belarus by using military groups such as the Kastus-Kalinowski regiment in Ukraine, which consists of Belarusians who’ve rushed to join the Ukrainians in their battle against Russia. Several members of the regiment have themselves said that they hope to one day bring the fight back home to take on the Lukashenko regime.

However, such plans are of little relevance to the people living in Belarus, while any sort of armed rebellion will likely be met with a predictable military reaction from Russia.

On the one hand, the Belarusian opposition is non-existent in Belarus and the Minsk regime’s brutal political repression makes it close to impossible for anyone to express dissent publicly.

On the other hand, the Belarusian opposition is very much alive outside Belarus. Belarusians abroad regularly stage demonstrations against the regime; and the more people that leave Belarus, especially for EU countries, the more support the opposition gains abroad.

Through its work, Tikhanovskaya’s office has this year been able to receive guarantees from the Polish government that Belarusians fleeing Ukraine will receive the same support as Ukrainians fleeing Ukraine. Most recently, her office has also begun working closely with the Ukrainian government to ensure that the Belarusians that remain in Ukraine are not deported to Belarus due to problems with visa renewals.

Belarus is a small country of only 9.2mn inhabitants, and its population count has even been said to have decreased substantially due to people fleeing political repression and because of the regime’s nearly non-existent attempts to stop the coronavirus (COVID-19) pandemic.

According to Tikhanovskaya, her office works with the ever-increasing Belarusian diaspora to “reorganise and co-ordinate them so that they work not just for themselves but for Belarus, for Belarusians.”

Engaging fleeing Belarusians in political activism and showing them that the exiled opposition in fact can ensure their safety abroad is crucial to maintaining and enhancing the opposition's legitimacy and relevance versus the Minsk regime. With a sizeable diaspora, more opposition-minded Belarusians abroad also have a greater chance of bringing opposition sentiments back home.

However, much work to achieve this is still needed. As the Belarusian opposition figure Olga Karach said at her press conference on August 9, it’s still “practically impossible to get an EU visa while being in Belarus.”

Western countries must ease visa restrictions for Belarusians to help them leave the country and stay abroad. This is crucial in order to prevent the exiled opposition becoming completely separated from the people at home.

On August 9, Tikhanovskaya announced the creation of a “United Transitional Cabinet” during a press conference. This cabinet will for six months include a representative responsible for the transition of power (Pavel Latushka); one for the restoration of law and order (Aliaksandr Azarau); one for foreign affairs (Valery Kavaleuski); and one for defence and national security (Valery Sakhashchyk). Representatives for social policy, economy and finance and national revival are still to be appointed.

As Tikhanovskaya said: “The Cabinet is a very important step. But its creation alone will not solve all problems.”

During the press conference, it was clear that a focus on an armed rebellion was not being ruled out. The danger with this idea is that it focuses on a non-existent “army”, along with the hope that such an army will simply appear and overthrow Lukashenko as soon as Ukraine wins against Russia.

Of course, various opposition figures are unable to let go of this idea and the exiled opposition must compromise so as to not descend into never-ending squabbles over the correct strategy.

However, the new Cabinet would do well to put this idea aside and focus on supporting the rights of Belarusians abroad; engage Belarusians abroad in political activity; unite the various opposition news outlets in the digital information sphere; and, most importantly, appeal to the needs of Belarusians at home, who are increasingly focused on high inflation and Belarus’ overall stagnating economy.