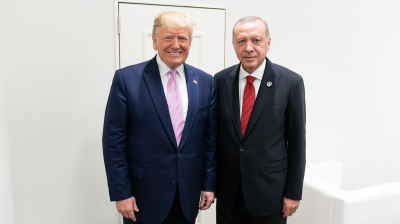 Might Trump come through for his pal in Ankara? / The White House.
By bne IntelIiNews May 13, 2020

It would likely take a strong endorsement from US President Donald Trump for the Federal Reserve to extend a dollar swap line to Turkey that would help ease its cash crunch of depleted foreign reserves and high FX debt obligations, according to a former chief of the New York Fed.

“I would be very surprised if the Fed did it unilaterally,” William Dudley told Reuters.

“It seems the reasons why the swaps are needed in Turkey do not fit into the Fed’s stated goals. It’s also hard to imagine that the Fed would run out swaps to a country that is having some bumpy relations with the United States. Never say never but the bar is pretty high to extending these swaps,” he added.

However, Dudley—who from 2009-2018 was vice chair of the US central bank’s policy-making committee and ran its New York branch that oversees foreign funding and is now a senior research scholar at Princeton University—was also cited as saying: “You could imagine the Trump Administration weighing in in a forceful way that would affect the Fed’s thinking. The Fed doesn’t want to pick winners and losers and effectively choose who is following an appropriate set of economic policies. It’s really for that country and the IMF to decide how to support foreign investor confidence.”

Ankara has appealed directly to Washington for a Fed dollar swap line. It is also discussing funding with other central banks.

The Turkish lira (TRY) fell to a historical low against the dollar last week, hitting 7.2685, and is down more than 15% this year, with investors anxious over the cash crunch and the prospect of a severe economic downturn due to pandemic containment measures in the face of the coronavirus (COVID-19). Turkey’s central bank has been burning through its FX reserves in an effort to stem the depreciation of the lira. The country’s IMF-defined FX reserves, which exclude gold and short-term swaps, sank below zero at end-February while the figure without the exclusion of gold dropped into negative territory as of mid-April.

Turkey’s response to the TRY descending to a new all-time low has included an attempt to blame the situation on “manipulative” trading conducted by foreign players, while efforts to step up import compression and capital control are under way.

The central bank said on May 13 that Turkey’s current account deficit in March widened to $4.923bn, a figure that exceeded the Reuters forecast for $4bn. In February, the deficit stood at $1.154bn, while for 2019 Turkey posted a current account surplus of $1.674bn. The main export markets of Turkey in Europe have been squeezed by COVID-19 lockdowns, while, given the international health emergency, the country will struggle to attract enough foreign holidaymakers, along with their hard currency, this summer to achieve a successful peak tourism season.

The Wall Street Journal (WSJ) on May 13 said the impacts of the pandemic on Turkey’s economy were making the policy of burning up the FX reserves unsustainable and pushing the country towards a full-blown crisis.

Many analysts assess that the Erdogan administration may now need to introduce capital controls or seek help from the International Monetary Fund (IMF), but President Recep Tayyip Erdogan would have to make a policy u-turn to go to the IMF and he would probably find that politically unpalatable.

“I’m fairly sure that we will end up there eventually,” Refet Gurkaynak, an economics professor at Bilkent University in Ankara, was quoted as saying by the WSJ in response to his views on the IMF and capital controls options. “Not because this is going to be preferable to other things but because it will turn up to be the only way of doing things,” he added.

Erdogan, meanwhile, has once again been hurling rhetoric at unnamed foreign market forces that he tells Turks are intent on destroying their economy. “We are very aware of the traps being set,” Erdogan said on May 11.

Turkish regulators have attempted to stifle trading of the lira offshore. Throughout May 13, the currency traded in the 6.96-7.00 range against the dollar.

Turkish industrialists and banks are holding about $155bn in short-term foreign currency debt, leaving them vulnerable to further lira weakness.

Erdogan is widely seen as having been at the helm of Turkish monetary policy that has brought about ultra-aggressive easing since July last year when the populist strongman fired the central bank governor by presidential decree. Despite the lira weakness, it appears he remains dead set against hiking rates. But Gurkaynak was also quoted as saying Turkey will be unable to keep interest rates low while shoring up the lira by burning through its foreign currency reserves, remarking: “Those things can’t work together for too long,” he said. “One or the other will have to be chucked.”

"The Turkish authorities need something to turn sentiment—that can be either COVID-19 concerns easing, news on the swap facilities, engagement with the IMF, or the CBRT [Central Bank of the Republic of Turkey] somehow convinces everyone as to its capability/credibility," Bluebay Asset Management's Timothy Ash said in a note to investors.

In a note analysing the latest current account data, Muhammet Mercan, chief economist at ING Turkey, said: “Despite the widening deficit, the 12M rolling current account balance remained in surplus, at US$1.5 billion, though it declined over the previous month's US$6.3 billion figure, which indicates that the deterioration has gathered pace due to the Covid-19 impact.

“On the capital account, March showed a significant US$7.7 billion of outflows mainly due to the sharp decline in debt creating flows. With the c/a deficit and large negative net errors & omissions reading at US$-4.0 billion, official reserves plunged by US$16.6 billion.

“In the breakdown, debt creating outflows were attributable to 1) foreign banks’ reducing their deposits in Turkey by US$2.6 billion 2) non-residents cutting their exposure to domestic debt by US$2.1 billion 3) US$0.7 billion drop in trade credits and 4) long-term debt repayments of banks (US$-0.4 billion) and corporates (US$-0.1 billion). In March alone, the long-term rollover ratio for banks was at 77% vs 94% of corporates, while the ratios were at 74% and 84%, respectively on a 12M rolling basis. So, the data shows that Turkish banks and companies weathered the market volatility in March reasonably well.

Regarding non-debt creating flows, gross foreign direct investment flows at US$0.9 billion matched to a great extent the outflows from the equity market at US$1.1 billion. Finally, residents transferred US$1.5 million abroad driven by financial investments of local banks.”

Confirmed Erdogan nonbeliever Julian Rimmer of Investec said in a May 13 note: “Turkey's obsidianal defence of the lira at the 7 level against the dollar is ongoing but complicated by events deary boy, events. Like the CAD deficit of $4.9bn for March which is clearly going to deteriorate in April.

“The Turks, or rather the cardbaord cut-outs at the helm of the [Erdogan-led ruling party] AKP, should let the currency go and hike rates and if Turkey cosied up to the west and stopped its military engagements in Libya and Syria then that might help pay for some of the short-term economic damage. On every occasion the CBT performs an emergency rate hike when the mkt forces it to, the currency strengthens and inflation is lowered.

“I don't understand why they seem to forget this every time. All that said, the only check on the unlimited powers and the deranged ukases issued by Weirdogan is the currency. Every note of the Kim Il Sung songbook he hits, the fx mkts punish him and keep him, barely, in check. If he had $500bn of reserves like the other short-ar$ed despot in Moscow, he would simply be untameable as well as unbearable.”