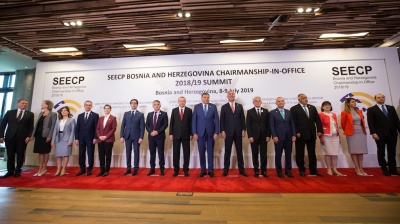 The brawl at Sarajevo airport between Bosnian border guards and Turkish President Recep Tayyip Erdogan’s personal security was the only time things turned physical, but it came on top of a whole series of acrimonious verbal clashes between members of the South East European Cooperation Process (SEECP) at their latest summit in the Bosnian capital on July 8-9.

The SEECP is an ambitious project initiated by Bulgaria back in 1996 with the aim of encouraging cooperation and creating an atmosphere of trust, good neighbourly relations and stability in a divided region. It brings together old adversaries such as Turkey and Greece, and Serbia and Kosovo.

But the main glue holding the region together in recent years has been the prospect of integration with the European Union. Some participants are now EU members, while most others have set entry to the bloc as one of their main political goals. However, as enthusiasm for enlargement waned in some West European capitals — and despite efforts by the European Commission to revitalise the process it still seems a remote prospect for states in the region — the impetus for regional cooperation and the resolution of historic differences has waned.

Most recently, EU leaders dealt a blow to Albania and North Macedonia when they decided to postpone a decision on the opening of accession negotiations with the two countries until October, even though they had already met conditions to start the talks. Skopje in particular had taken the radical and politically difficult step of changing the country name from Macedonia to North Macedonia to persuade Greece to lift its objections to its progress towards accession.

Meanwhile, the conflict between Serbia and Kosovo, which unilaterally declared its independence from Belgrade in 2008, has worsened recently, even though both countries' accession prospects depend upon reaching a negotiated settlement. Pristina’s decision to impose 100% tariffs on goods imported from both Serbia and Bosnia & Herzegovina (which also does not recognise Kosovan independence) has only deepened the rift.

Kosovo refused to take part in the SEECP summit after President Hashim Thaci received what he described as a "humiliating invitation” from the chairman of the Bosnian presidency Milorad Dodik. In a Facebook post, Thaci hinted that the invitation received by Kosovo was different from those sent to other states, saying that the Kosovan delegation was not treated as coming from a sovereign nation.

Efforts by some Bosnian politicians to recognise Kosovo have been blocked by Bosnian Serbs. Dodik himself is a staunch Serb nationalist, who has frequently called for Bosnia’s Serb entity, Republika Srpska, to secede from Bosnia.

The spat widened when Albania’s acting Foreign Minister Gent Cakaj then announced that his country had cancelled its participation in the Sarajevo summit in solidarity with Kosovo. “The treatment by the organisers is unacceptable and goes against the aim of creating an atmosphere of trust, good neighborly relations and stability. There is no cooperation without equal treatment,” Cakaj tweeted on July 7.

However, Albania’s internal political divisions were also on display at the summit. While Prime Minister Edi Rama didn’t attend, President Ilir Meta did. Rama’s government and Meta have locked in a bitter conflict since Meta cancelled the June 30 local elections. The vote went ahead anyway, and MPs from Rama’s Socialist Party have initiated procedures in the parliament to impeach Meta.

The Serbia/Kosovo conflict also resulted in a brief war of words between two other states attending the summit. Serbia’s Foreign Affairs Minister Ivica Dacic criticised Bulgaria’s Prime Minister Boyko Borissov for saying that the nominee to be the next EU foreign policy chief, Spanish Foreign Minister Josep Borrell, should respect the position of the EU on Kosovo rather than that of Madrid. Spain is one of five EU members that does not recognise Kosovo.

Dacic responded by attacking Borissov in an interview with Serbia broadcaster RTS: “Boyko, let me tell you one thing, the attitude of the EU is not that Kosovo is an independent state. You, Boyko, have to respect the attitude of the EU, and not give a lesson to Borrell. What does that look like, it is disrespectful,” Dacic said in the interview.

Borissov responded by telling journalists during the summit that he would not talk to either Serbian President Aleksandar Vucic or Prime Minister Ana Brnabic until he received an apology from Dacic. He stressed that the tensions between Serbia and Bulgaria are “unacceptable” for the EU.

Bulgaria has been a strong advocate for integration of Serbia and other Western Balkans countries with the EU, making this one of the priorities of its recent EU Council presidency, as did neighbouring Romania, and — most likely under pressure from top Serbian politicians — Dacic made his apology on July 9.

Despite all the differences on show, the SEECP leaders that attended the summit agreed on a joint declaration that emphasised their common future “within a unified, democratic and prosperous Europe”. It also talked of the importance of unity, “Stressing that good neighbourly relations, mutual respect and sincere political dialogue in resolving issues have no alternative.”