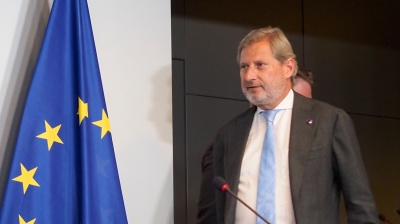 Enlargement Commissioner Johannes Hahn warns of the dangers of the EU not following through on its promises.
By Clare Nuttall in Glasgow June 19, 2019

The latest decision — or lack thereof — on the accession progress of Albania and North Macedonia at the European Council meeting on June 18 risks undermining the EU’s credibility in the Western Balkans, a point clearly made by Enlargement Commissioner Johannes Hahn at a press conference after the delay was announced.

The prospect of closer links with the EU and eventual accession has been arguably the single most effective factor in persuading politicians from the region to make reforms and come to the negotiating table to solve some of the deep conflicts that divide countries in the region. It has also helped get reluctant populations behind radical changes, one notable example being the politically contentious name change of the country formerly known as Macedonia to North Macedonia.

Both Skopje and Tirana were hoping that the steps taken in the last year — the name change in particular, but also the wide-reaching reforms of the judiciary in Albania — would result in the two countries being rewarded with firm dates for the start of accession negotiations at this week’s European Council meeting.

Instead, following intense discussions among member states, the decision was postponed until October.

This was partly down to technical issues: in particular, with the publication of the latest package of enlargement progress reports delayed until after the European Parliament elections at the end of May, the German Bundestag didn’t have time to consider and approve the start of accession negotiations with the two states.

However, it was inevitably seen as a setback in the two accession candidate countries. “It is regrettable that #EU Member States did not stick to the conclusions of June 2018, which sets out the path towards opening the accession negotiations with [Albania] in June 2019! However, the road remains open for October 2019 and [Albania] committed to EU related reforms. #Albania4EU," tweeted Albania’s former foreign minister Ditmir Bushati.

Meanwhile, North Macedonia’s Foreign Minister Nikola Dimitrov expressed optimism about a positive decision in October: “Let’s be realistic, let’s do the impossible! And we will manage in Oct because we have shown already that we can move mountains. And we will continue the reform path because we want our #European dream come true. And I have one promise: we will make it embarrassing not to happen!” he tweeted.

A similar point was made by Hahn who held a press conference after the Council meeting, at which he warned of the consequences of the EU failing to follow through on its side of the bargain when dealing with candidate countries.

“It’s unfortunate that a minority of member states were not able to support the Commission’s clear proposal to open accession negotiations with Albania and North Macedonia already today,” he told journalists on June 18.

"It remains the Commission’s firm belief that the union has to reward those that delivered on all the recommendations that the Council itself unanimously accepted in Luxembourg exactly one year ago. Our collective credibility is at stake and our incentives and leverage for tough reforms across the region are equality at stake."

Hahn also stressed the importance of enlargement to the western Balkans not only for states in the region, but also for the EU. “We are not proposing [rewarding reform progress] to be nice to specific counties, but because it’s in our very own self interest. Either we export stability or we will import instability … [Enlargement is] not just a matter of being firm and fair with specific partners, it’s a matter of credibility, accountability and the strategic intentions of the EU as a whole.”

Hahn said he was confident a decision would be made in October, saying that: “indecision and inaction are not an option”.

The EU’s influence in bringing about reforms in the Western Balkans is perhaps best illustrated by the so-called name deal in North Macedonia. However, should the EU fail to reward Skopje for this politically difficult step, the EU’s ability to motivate other states in future will be compromised, Hahn said.

This incentive has also been effective in the negotiations between Belgrade and Pristina. “Without credible examples [of progress towards EU integration] in other cases, it's difficult to motivate the leaders in Belgrade and Pristina to return to the negotiating table because it’s not an easy task and it needs a lot of political courage to work on a compromise, an agreement,” according to the commissioner. “They have to know what are the positive consequences, and the positive consequences can only be the European perspective.”

In the case of Albania, Hahn stressed that the country, like North Macedonia, has delivered on the reforms in five key priority areas requested by the Council last year.

He did, however, acknowledge that “of course we cannot totally ignore the domestic political situation and this is very much influencing the assessment of some of our member states” — the country was plunged into a constitutional crisis when President Ilir Meta cancelled the June 30 local elections; the government says the vote will still go ahead and has launched procedures to impeach Meta. On top of this, concerns about organised crime have surfaced again in several member states, notably the Netherlands.

Hahn’s point about the need for the EU to make accession an achievable prospect for would-be members is one that has gained increasing force within Brussels in the last couple of years.

Back 2017, the influential Balkans in Europe Policy Advisory Group (BiEPAG) issued a report warning that countries across the Western Balkans were backsliding on reforms and becoming increasingly authoritarian as the prospects of EU accession receded.

The group of analysts and scholars argued that the EU has neglected democratic processes in the Western Balkans for some time, and needed to speed up the process of integration to prevent further deterioration of the situation. The policy paper “The Crisis of Democracy in the Western Balkans, Authoritarianism and EU Stabilitocracy” said that all major indices of democracy indicated that the Western Balkan countries had moved away from becoming consolidated democracies over the past decade — a consequence of both the international economic crisis and the EU’s decreasing focus on enlargement.

The European Commission sought to revitalise the process with the launch of a new enlargement strategy in 2018, aimed at staving off instability and countering the influence of Russia and China in the Balkans. The document marked a shift in tone since European Commission head Jean-Claude Juncker said in 2014 there would be no EU enlargement in the foreseeable future, and for the first time set out tentative dates for most of the states from the region to progress, including the target accession date of 2025 for Serbia and Montenegro.