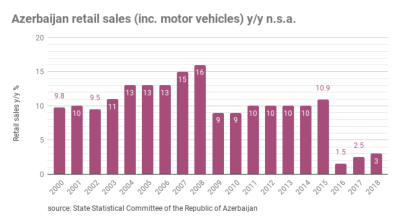 Azerbaijan’s retail trade turnover grew by 2.6% y/y in comparable prices in the first two months of 2019, reaching AZN5.5bn (€2.9bn), the State Statistical Committee of the Republic of Azerbaijan reported.

Turnover of food products, beverages and tobacco products amounted to AZN2.8bn, while AZN2.7bn worth of non-food products were sold.

A breakdown of the results showed that the strongest increases in turnover were for pharmaceutical and medical products, up 3.4% y/y, and clothes, shoes and textiles, up 3.1%. Food products turnover rose 2.6%.

Azerbaijan’s retail turnover was strong until the collapse of oil prices at the end of 2014 as a middle class began to emerge. However, following the crisis retail has started to recover again as oil prices stabalised.

OUTLOOK 2020 Azerbaijan
COMMENT: Will the US launch large scale war against Iran following the assassination of Qasem Soleimani
Caucasus braces for conflict in neighbouring Iran

Belarus GDP grew by 1.2% y/y in 2019
1 day ago
Jump in Polish CPI confirmed at 3.4% y/y in December
2 days ago
Romania’s external debt rises on chronic wide CA gap
4 days ago
Ukraine consumer inflation ends 2019 at 4.1%
5 days ago
The number of unemployed Czechs reached its lowest level since 1996
8 days ago