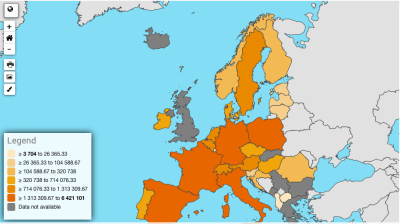 Share of cars that are under two years old. / Eurostat
By bne IntelliNews August 22, 2022

Under 1% of the cars on the roads in Albania are less than two years old, according to data compiled by the EU’s statistics office Eurostat.

Albania, followed by neighbouring North Macedonia, has the oldest car fleet out of 29 countries assessed by Eurostat, including EU members, EEA countries and candidate countries. Data was not available for the remaining Western Balkan states.

At the other end of the spectrum, Luxembourg had the highest share of new passenger cars, with 22% of all passenger cars in the small country under two years old.

France, Austria, Ireland, Belgium and Sweden all had shares of between 16% and 17% new cars.

A number of countries mainly in Western Europe have launched programmes to support purchases of new cars with low emissions, though the renewal of the fleet has slowed recently as the coronavirus (COVID-19) pandemic disrupted automotive supply chains.

Meanwhile, many East European markets, especially those in the poorer EU members and candidate countries like Albania, are dominated by second-hand imports from Western Europe.

This is despite a number of governments and city authorities considering bans on the oldest, most polluting cars.