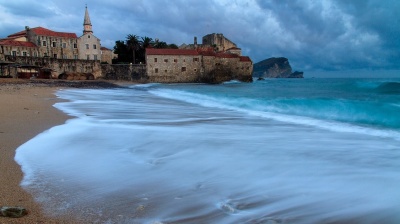 Montenegro's tourist resorts such as Budva (pictured) will be badly hit by travel restrictions imposed during the coronavirus pandemic.
By Valentina Dimitrievska in Skopje April 2, 2020

Significant losses in the tourism sector in Albania and Montenegro are expected due to the coronavirus (COVID-19) pandemic, according to S&P Global Rating's Stress Scenario.

The two Western Balkan countries are ranked among 15 countries that will see huge consequences for their tourism sectors from the pandemic, a list that also includes Aruba, the Bahamas, Barbados, Cape Verde, and Fiji.

“The impact is expectedly large for … small tourist-driven economies such as Barbados, Aruba, Belize, Cape Verde, Montenegro, and Albania,” the analysis released in March showed.

According to S&S’s “Sovereigns Ranked by Deterioration in GDP growth” table, Montenegro has been placed sixth in the world, Croatia 10th and Albania 13th.

The analysis was based on three scenarios - 'limited', 'extensive' and 'extreme'.

In the 'limited' scenario, only three sovereigns would experience a worsening of their fiscal deficit by 1% of GDP or higher, which are Aruba, Montenegro and Cape Verde.

The 'extreme' scenario has a total of 17 sovereigns where fiscal metrics deteriorate by at least 1% of GDP. This grouping of economies also include some countries where the external impact is relatively more limited, such as Croatia, Curacao, Jamaica, Georgia, Malta, Jordan, and Iceland.

“Albania and Georgia additionally appear somewhat vulnerable, but, given both countries' relatively healthier starting position on their external balance sheets, they appear somewhat more capable of handling the shock,” the analysis showed.

The analysis suggests that small "Sun, Sea, and Sand" island destinations such as Aruba, the Bahamas, Barbados, Cape Verde, and Fiji would be the worst affected from a slowdown in global tourism flows.

The second most vulnerable region in the world in terms of tourism losses is Central and Eastern Europe, particularly the Balkans, which contains several countries with meaningful tourism sectors. Montenegro appears most vulnerable within this grouping, mostly because it relies on tourism for two-fifths of total current account receipts — by far the largest in all of Europe. 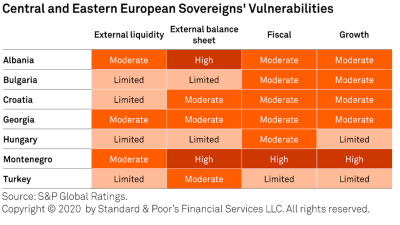 External indebtedness is set to deteriorate most dramatically in the Bahamas, Montenegro and Greece, each of which would experience a worsening of around 30% of current account receipts in the "extreme" scenario.

The analysis shows that Albania and Georgia appear somewhat vulnerable, but, given both countries' relatively healthier starting position on their external balance sheets, they appear somewhat more capable of handling the shock.