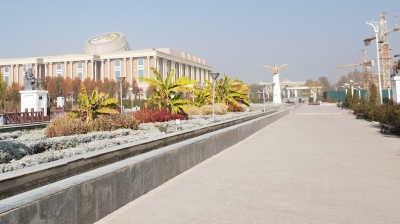 Construction underway in Dushanbe, which retains practically nothing of the village that it was in the early 20th century and increasingly little of its past as the capital of the Soviet Tajik Republic. / Jonathan Melliss
By Jonathan Melliss of Alaco January 16, 2019

Days before my arrival in Dushanbe, a prison riot in the northern city of Khujand, allegedly sparked by Islamic State militants, led to the deaths of over 20 inmates and several guards, raising a few eyebrows in the office.

When asked by colleagues on my return whether I had noticed any security reaction, my perhaps unilluminating answer was that I had been slightly put out to find Facebook not updating (the authorities had blocked social media and news sites after the incident). But aside from that nothing seemed to be amiss in the city. It was hard to say whether my colleagues were relieved or disappointed.

For Tajikistan, there was better news by the end of my trip. President Emomali Rahmon together with his son and current Mayor of Dushanbe, Rustam, presided over the opening ceremony of the first turbine of the Rogun Dam, which when fully constructed in 2028 will reportedly be the world’s highest.

The dam is by far the largest ongoing project in Tajikistan and a matter of considerable prestige for President Rahmon.  Funded in part by a controversial domestic share offering, the project, initially planned during the Soviet era, has been hailed as a means for Tajikistan to achieve energy independence, end the frequent blackouts in the country and provide electricity to the energy-thirsty Talco aluminium smelter, the country’s largest industrial asset.

These two news items which bookended my stay in Dushanbe are symptomatic of international media coverage of Tajikistan which understandably largely opts to focus on its eccentric president or the issue of terrorism in the country. While both of these are undoubtedly fascinating, the purpose of my trip was thankfully more prosaic.

Over the course of several days in Dushanbe, it became clear that the commercial outlook for firms operating in the country is tricky to say the least. An effective tax rate of over 80% (comprising a variety of tax and social security contributions), the existence of over 30 separate government regulatory and supervisory bodies, and the dearth of suitably educated middle managers mean that the prospect of opening a business in Tajikistan is daunting.

One contact said that his growing firm had received over 10,000 applications to fill just 165 positions and that an official unemployment rate of 2-3% hid a reality of low wages combined with over-employment at many companies. As a result, my contact said, the firm had largely opted to hire school leavers and provide their own training as opposed to making experienced hires. The fact that there are only a handful of accountants in Tajikistan with the internationally recognised ACA accountancy qualification is again symptomatic of the problems facing Tajik businesses.

As ever in capital cities, this economic reality was not reflected in the pristine central streets of Dushanbe.  Increasingly dominated by 15-storey new builds, most of which appeared to be largely empty during my recent visit, the city retains practically nothing of the village that it was in the early 20th century and increasingly little of its past as the capital of the Soviet Tajik Republic.

In their place, gleaming new tower blocks, often featuring peculiar light shows, have emerged, as well as a plethora of new state buildings, including the National Museum, a National Library and a planned new parliament.

This remodelling of the city is very much in the image of President Rahmon who since the Civil War has sought to engage in a project of nation building to reduce the likelihood of inter-regional conflict flaring up again. For a city that is apparently uninterested in preserving its historic buildings, there is no shortage of newly constructed monuments to historical figures from Tajik history, most memorably to Ismail Somoni, the ninth century Emir of the Samanid Empire who controlled large swathes of present-day Central Asia, Iran and Afghanistan.

It’s difficult to know what to make of the transformation of the city. An impulse to compare Dushanbe unfavourably to the ancient regional capitals of Samarkand and Bukhara, two historically Tajik-speaking cities in Uzbekistan, is clearly unfair and it is a question of personal taste whether the residential towers increasingly dominating the landscape are attractive anywhere, be that in Dubai, Dushanbe or indeed London.

Jonathan Melliss is an associate at Alaco. Alaco Dispatches is the business intelligence consultancy’s take on events and developments shaping the CIS region.

ING: Europe faces stiff competition for natural gas
4 days ago
PANNIER: Might Tokayev be the real deal?
8 days ago
OPINION: Bosnia economic salvage supplants breakup mood
14 days ago
ASH: Turkey is heading to “incumbent democracy”
14 days ago
RIMMER: You only sing when you’re winning
15 days ago