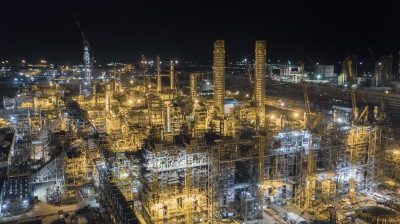 Leading Russian petrochemical company Sibur's revenues were down 7.8%, but that was offset by the growth of 30.4% y/y of polymers produced by the new ZapSib facility
By bne IntelliNews May 14, 2020

Leading Russian petrochemical company Sibur's revenues were down 7.8% year on year due to falling prices in ruble terms caused by the double shock of collapsing oil prices and the coronavirus (COVID-19) pandemic, but the fall was cushioned by the completion of its ZapSibNeftekhim petrochemical complex (ZapSib) in Siberia, which is now online and starting to contribute to the bottom line, the company said on May 14.

Revenue decreased by 7.8% y/y due to negative pricing dynamics in ruble terms in the midstream and the plastics, elastomers & intermediates segments, the company reported. “This was partially offset by revenue growth of 30.4% y/y in the olefins & polyolefins segment, driven by higher sales of polypropylene and polyethylene,” Sibur said in a statement.

None of Russia’s companies are going to escape the impact of economic shock caused by the pandemic, but Sibur luckily completed work on the giant new ZapSib facility, which bne IntelliNews profiled last year when it was nearly completed. That has both dramatically cut the company’s capex outgoings and contributed to the bottom line by producing more higher-value products to the group's output.

And despite the crisis, the demand for plastics will remain strong, according to Fatih Birol, executive director at the International Energy Agency (IEA), which has just issued a big report on the outlook for the hydrocarbon industry.

“I wouldn’t think the petchems industry will be so badly affected [in the long term] as other sectors of the oil consuming sectors,” Birol said, speaking to reporters in Paris on May 14. “There are two types [of end demand]: We see a push in demand because of [the] need for PPE [personal protective equipment], disinfection and packaging ... at the end of the day, petchems won’t be one of the badly hit sectors; on the contrary, it is set to be one of the more resilient,” he added.

ZapSib went online in the first quarter of this year and produced 115,000 tonnes of polypropylene and 259,000 tonnes of polyethylene, part of which is still en route to clients and so not reflected in the current financial reports. As a result of ZapSib the sales of polypropylene and polyethylene grew by 87.3% and more than 100% y/y respectively, much of which won’t show up in the financials until the second quarter. In January 2020, the company also completed the construction of its new thermoplastic elastomers production facility in Voronezh and has launched trial production.

The EBITDA decline of 15.2% y/y as a result of lower margins for most product groups was due to negative pricing dynamics but was still more modest than the industry average. In the olefins & polyolefins segment, the fall in earnings was offset by higher sales of polypropylene and polyethylene that are among the main products produced by ZapSib.

The EBITDA margin was 31.0%, remaining consistently high against the industry average, the company said.

Net operating cash flow was flat y/y and amounted to RUB23bn ($311mn) due to lower profit tax expense as a result of the financial loss recorded for the period, which was driven by the non-cash negative impact of FX revaluation following the sharp decline in the ruble exchange rate, caused by the collapse of oil prices in March.

“In terms of the external factors beyond our control, the beginning of the year delivered a perfect storm for us – the unprecedented pandemic paralysed the operations of entire industries around the world, constraining global economic growth,” Dmitry Konov, chairman of the management board of Sibur Holding, said. “The recently completed large-scale investment project – ZapSib – is already helping us offset negative effects of low hydrocarbon prices by boosting internal consumption of feedstock materials and higher production of polymers.”

“In the first quarter, the project made its first contribution to the EBITDA of the olefins & polyolefins segment, supporting stable operating performance in the reporting period despite the negative pricing environment. EBITDA margin remained high, thus providing a greater degree of resilience, which is necessary for the further growth of the company and the Russian petrochemical industry as a whole, amid continued market volatility,” Konov added.

Sibur’s net loss for the first quarter was RUB52.3bn ($707mn), driven by a negative RUB84.5bn impact from FX revaluation (mostly $- and €-denominated loans). Excluding the non-cash FX impact, adjusted net profit for the period amounted to RUB32.2bn, the company said.

Sibur’s debt and repayment schedules remain at comfortable levels. The majority of the company’s debt relates to the ZapSib project, the operational results of which have yet to be included in the full financial reporting. “Once the project reaches its full production capacity, Sibur’s leverage will start to improve,” the company said.

STOLYPIN: Russia’s opportunistic MENA policy: scavenging, not strategising
Famous ex-defence reporter arrested, accused of treason
US intelligence memo admits there is “no evidence” of Russian payment of bounties to Afghans for killing US soldiers