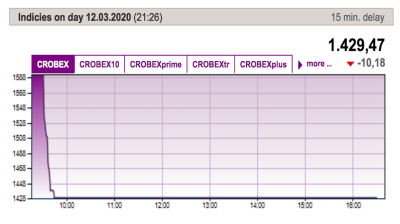 Trading on the Zagreb Stock Exchange (ZSE) was suspended for most of the day on March 12 after its main index, the CROBEX, slumped by over 10% shortly after trading opened.

Trading was initially suspended for one hour at 9.43am local time after the CROBEX dropped by more than 10% compared to the previous day, in line with ZSE rules.

It resumed an hour later, but shortly afterwards, the Croatian Financial Services Supervisory Agency (HANFA) ordered a suspension in trading until the end of the day to protect investors. A statement from the regulator, published by the ZSE on its website, cited “outstanding market volatility”.

The ZSE took a similar step on March 9, suspending trading for an hour during a day of chaos on international exchanges sparked by a combination of the fast-spreading coronavirus and the failure of OPEC+ talks with Russia, which has caused oil prices to tank.

Croatia was the first country in Central and Southeast Europe to confirm a Covid-19 coronavirus case, on February 25. As of March 12 there were 25 cases in the country, considerably fewer than in neighbouring Slovenia, where the total has now reached 82.

Some of the big names on the Zagreb exchange sustained heavy losses early on March 12, with the biggest fall in value reported by Arena Hospitality Group, as Croatia’s large tourism sector is anticipated to be badly hit by the coronavirus pandemic and efforts to contain the spread of the infection by restricting travel. Arena’s share price dropped by 20.61% to end the day at HRK208 (€27.4).

“[In] recent weeks there has been reduced demand for international travel, which has resulted in an increase in cancellations and a slowdown in future bookings across the travel and hotel industry,” Arena said in a statement published by the bourse.

“Due to the fast-moving nature of the situation, it is too early to provide any meaningful estimate of quantum on the group’s earnings for the current financial year given the trajectory and duration of the virus, and its impact remains highly uncertain. The necessary actions to minimise the impact on the business are taken.”

Arena sought to reassure investors by stressing its strong balance sheet, well-invested estate and owner-operator business model, as well as pointing out that it is “following all guidelines provided by the World Health Organisation and other relevant authorities to ensure the continued safety of our guests and our team members”.

Another major tourism company, Valamar Riviera, was also among the big losers of the day, wth 14.17% wiped off its share price.

Tourism accounts directly and indirectly for around 25% of Croatia’s GDP, according to data from the World Travel and Tourism Council (WTTC), which puts it among the most tourism-dependent countries worldwide. Millions flock to the country’s Adriatic coast and islands every summer.

This year, while no official data on tourist arrivals is available yet, Tourism Minister Gari Cappelli said on March 11 that the number of tourists in Croatia in the first ten days of March was 30% lower than in the same period of 2019, state news agency Hina reported.

But the sharp fall in share prices was not confined to the tourism sector. Among the other major companies to see significant declines were telco OT-Optima Telekom that dropped 17.43%, shipping company Tankerska Next Generation (down 14.03%), food processing and pharmaceutical company Podravka (down 13.98%) and automotive components manufacturer AD Plastik (down 13.04%).

“The situation caused by the spread of the Covid-19 virus caused panic in the capital market, as evidenced by the decline in the price of all shares and CROBEX. Nevertheless, our operations at all sites of the AD Plastik Group have so far been in line with business plans and we have no customer announcements of changes,” said AD Plastik in a statement published by the ZSE. The company added that there had been no material impact on its business from automaker FCA Group’s decision to temporarily close its factories in Italy.

In addition to the volatility on the stock exchange, Croatia’s currency, the kuna, is also under pressure. The Croatian National Bank (HNB) intervened on the foreign currency market for the second time this week on March 12, as reported by Hina. The central bank sold HRK347.8mn to commercial banks in an attempt to ease the depreciation pressure on the kuna.

The Croatian Chamber of Commerce (HGK) released the results of a poll on March 12, showing that three-quarters of Croatian companies (74%) are feeling the effects of the coronavirus on their business, up by 8 percentage points (pp) compared to 10 days ago.

In terms of geography, the greatest impact of the coronavirus on business is being felt in the Istria and Primorje regions, which is not surprising, as entrepreneurs in those regions are mostly dealing with the three Italian provinces affected by the infection.

HGK president Luka Burilovic said the results of the survey, among 1,300 respondents, sent a “clear message that we need to take action to help the economy as soon as possible”.

“The most important thing is to preserve the liquidity of companies and jobs, and in this regard, we have already proposed concrete measures to the government,” Burilovic said according to an HGK statement.

In addition, the difficulties experienced by importers “should also be seen as an opportunity to replace difficult imports with domestic production. That is why I urge all citizens to trust local producers and buy Croatian,” he added.

Movie night at the airport
COMMENT: Will Central Europe’s economic recovery be stymied by populist banking laws?
Adriatic ports after the storm