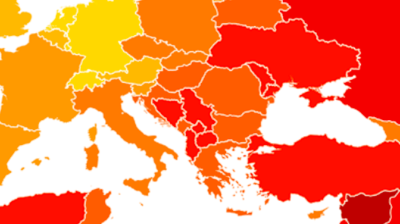 By Valentina Dimitrievska in Skopje January 23, 2020

Despite the efforts of the Western Balkans region to join the EU all six countries failed to improve their rankings on the Corruption Perception Index, except Montenegro, which inched up by one place.

North Macedonia and Albania both scored 35 on a scale of 0 to 100, with 100 marking the clearest perceived transparency and 0 marking the highest levels of corruption.

The two EU candidate countries are waiting for the bloc to set a date to start accession negotiations, after France vetoed plans to start talks at an EU summit in October.

There have been warnings of the risk of democratic backsliding in Albania, North Macedonia and other Western Balkans states should they lose hope of progressing towards EU membership.

With a score of 36 points, Kosovo followed the two laggards in the region. Kosovo was positioned at 101st place, falling eight positions in comparison to last year.

About Kosovo, the Transparency International said that the country “is experiencing a shift in parliamentary power that could offer an opportunity for change” following the October 2019 snap election.

"After years of criticising the government and international community in Kosovo for their failure to address corruption, the Vetevendosje party, which recently won a majority of parliamentary seats, has a chance to demonstrate its commitment to combating corruption," TI said in the report.

It pointed out that Vetevendosje was one of a few parties that responded to requests to disclose campaign costs during the recent election campaign.

“However, it remains to be seen if a new government will live up to a higher standard of political integrity,” it concluded

TI suggested that the next cabinet can do so by abandoning the practice of political appointments in state-owned enterprises and by establishing a strong legal obligation for financial disclosure by political parties.

Kosovo shared the 101st position with Bosnia & Herzegovina, which also had a score of 36. Bosnia dropped 12 positions from last year.

“Bosnia and Herzegovina significantly declined by six points on the CPI since 2012. The country also suffers from weak enforcement of campaign finance regulations,” the report said.

It recalled that during the 2018 elections, political parties and NGOs raised concerns over voting irregularities, threats against voters, the misuse of public resources and unequal access to the media.

Among the Western Balkan countries, Montenegro ranked the best, scoring 45 points and was in 66th place.

Montenegro was the sole country in the region that improved its ranking from last year — by one position — as well for having a score above the global average.

More than two-thirds of countries worldwide score below 50 on this year’s CPI, with an average score of just 43.