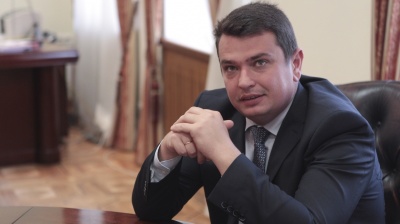 The National Anti-Corruption Bureau of Ukraine (NABU) has found out itself front and centre of the ongoing corruption scandal over alleged illegal profit of associates of President Petro Poroshenko from the war in Donbas.

According to the investigative Nashi Hroshi programme, NABU removed the name of a company from a 2016 list of suspicious entities involved in military procurement. Other law-enforcement bodies -- including prosecutors, the state security service SBU and the State Fiscal Service (SFS) also failed to follow up on suspicions regarding the company’s activities, Bloomberg reported on March 12.

According to February's investigation of Ukrainian journalists, Ihor Hladkovskiy, the son of the deputy secretary of the National Security and Defence Council (NSDC) Oleh Hladkovskiy, was a direct participant in "schemes in the millions" that stole money from Ukraine’s defence industry complex and illegally profited from the war.

Among the most outrageous alleged schemes is organising contraband imports of Russian parts for Ukrainian military hardware, and then selling them at highly inflated prices to the armed forces.

In 2018, NABU's head Artem Sytnyk already was under fire last year for a secret midnight visit the president’s private home for a meeting, which was slammed by local experts as a move, which "creates enormous suspicions and casts doubts on Sytnyk’s integrity"

Over the past year, NABU was also locked in a bitter conflict with the nation's recently-created Specialised Anti-Corruption Prosecutor's Office (SAPO) headed by Nazar Kholodnytsky.

In September 2018, the SAPO accused NABU detectives in an attempt to install a cable to spy again on the prosecutor’s office. When the alleged bureau detectives were caught, NABU special forces arrived at the scene, assaulted a prosecutor’s office security guard and broke his arm, stole his vehicle and caused an accident. The bureau agents also fought with police who arrived at the scene.

A new scandal followed demands of Ukraine's opposition leader and presidential candidate Yulia Tymoshenko that President Poroshenko voluntarily withdraw his candidacy from the presidential race in order for law enforcement authorities to investigate him on corruption charges.

The parliamentary majority consists of Poroshenko’s "partners" in corruption, who have ignored her legislative attempts to launch impeachment proceedings, she told a parliamentary committee meeting on March 11.

"The president is a criminal, the president has laundered the army's money," Interfax news agency quoted Tymoshenko as saying. "This is today quite obvious, and I therefore demand that Poroshenko withdraw his candidacy from the elections, give up his immunity [from prosecution] and be accountable in accordance with the law."

According to Zenon Zawada at Kyiv-based brokerage Concorde Capital, Tymoshenko has managed to successfully rejuvenate her election campaign by "milking the Russian military parts scandal for all it has to offer".

If the claims by investigative journalists are true that they didn’t time the broadcasts for the election campaign, they have nonetheless played a critical role for Tymoshenko, whose momentum as opposition candidate had otherwise been stolen by comic Volodymyr Zelensky, Zawada wrote in a note on March 12.

"But we are seeing that new information in the ongoing Nashi Hroshi investigative series is being gradually released to the public with careful timing," he added. "What that accomplishes is keeping the scandal a central theme in the daily elections news cycle, overshadowing the president’s campaign themes ."

According to latest polls, Tymoshenko has recovered her second-place ranking in the presidential race since the eruption of the Russian military parts scandal in late February. The Rating sociological service reported on March 11 that among decided voters, 24.7% will cast their ballot for sketch comedian Volodymyr Zelenskiy, 18.3% for Tymoshenko and 16.8% for Poroshenko.

At the same time, Zawada point out that the Tymoshenko campaign has consistently relied on polls produced by the Rating sociological group, which have consistently given her strong results. "Other polls will confirm whether she has enjoyed a bounce in support from the Russian military parts scandal," he wrote in the note.

"But this poll also confirms our expectation that the scandal hasn’t hurt Poroshenko’s ratings significantly," the expert added. "Instead, they seem to have boosted Tymoshenko’s standing, which means the president’s re-election campaign will have to reinforce for the public its key reasons to vote for Poroshenko, an even more important task than arguing why not to vote for his leading opponents."

The Mariupol siege is over as the last Azov defenders surrender
52 minutes ago
Kyrgyzstan: Eccentric health minister fights for his job amid claims of corruption and bullying
15 hours ago
Azov commanders have remained behind in the Mariupol steelworks to continue the fight
16 hours ago
Russia hopes Chinese carmakers will help revive Moskvitch brand
16 hours ago
Russia may leave the WTO and WHO. In practice, it never really joined
16 hours ago