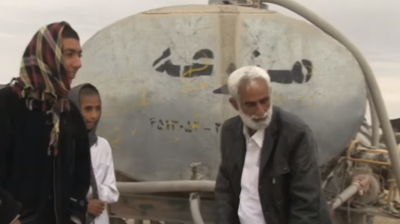 Street protests broke out overnight over severe water shortages in Iran's southwest, according to Iranian news outlets and unverified videos posted on social media on July 16.

Amid climate change, the country is facing its worst drought in 50 years. The unrest in the oil-rich region comes as it emerged that a severe drought in Central Asia has caused mass livestock die-offs and shortages of water for irrigation.

In Iran, video footage showed protesters setting fire to tyres to block a road. Security forces were seen attempting to disperse the crowds as some shots were heard. But Reuters reported that it could not independently verify the authenticity of the footage.

"State television should report what we are saying and show the image of the buffaloes that perished from lack of water," an elderly protester says on a video carried by the regional Asrejonoob news website.

The governor of the southwestern province of Khuzestan, Qasem Soleimani Dashtaki, appeared on state media on July 16 and denied that any protests took place.

However, on July 18, Aljazeera reported that during a second night of water protests, two young men were shot and killed in the Khuzestan town of Shadegan. Omid Sabripour, the local acting governor, speaking to IRNA on July 17, blamed the first death on “opportunists and rioters”. “During the rally, rioters shot in the air to provoke the people, but unfortunately one of the bullets hit a person present at the scene and killed him,” he said.

Iranian Energy Minister Reza Ardakanian has in recent months been cautioning that Iran would face trying water shortages in the summer, with this year "one of the driest in 50 years". Officials have referred to some provinces in the south and west as suffering precipitation drops of from 50% to 85% so far this year.

Drought has left no water for hydroelectric power plants in some parts of the country, meaning Iran faces an unprecedented summer of electricity cuts as power plant disruptions and a lack of investment in new capacity leave output far below demand.

The water shortage protests follow demonstrations over power blackouts in several cities last week and add to the tensions seen in demonstrations mounted by thousands of workers in Iran's energy industry—particularly at oil refineries and petrochemical plants—who are demanding better wages and working conditions.

The energy industry protests—dubbed "Campaign 1400" with reference to the Persian calendar year that started on March 21—have been unrelenting for months. It all points to a difficult start for Iranian President-elect Ebrahim Raisi, a hardline cleric who will succeed moderate President Hassan Rouhani on August 5.

In Central Asia, parts of the region are experiencing the worst drought in 13 years, while there are also reports of horrendous difficulties with water shortages faced by farmers in Turkey.

The US Department of Agriculture (USDA) this week cut its spring wheat production forecasts for Kazakhstan, Russia and the US, due to this year’s hot and dry conditions, according to Tobin Gorey, director of agricultural strategy at Commonwealth Bank of Australia. "The USDA took the razor to spring wheat production forecasts for the U.S., Russia and Kazakhstan because of the hot and dry conditions in those growing regions," Gorey remarked in a note to investors.

Ben Orlove, a senior research scientist at the Earth Institute of Columbia Climate School, told The Third Pole that recent studies point to shifts in precipitation patterns in the Tian Shan mountains. These mountains supply Central Asia with much of its freshwater for irrigation and pasture. “As the climate in the mountains warms, more of the precipitation falls as rain, rather than as snow,” Orlove said. “This shift is unfortunate, since snow melts slowly in the spring and summer, providing steady runoff, while rain typically runs off more quickly.”

In other climate change news from Turkey, thousands of baby flamingos have reportedly died at Lake Tuz in the past two weeks from a drought that environmentalists said was the result of the combination of climate change and agricultural irrigation methods.