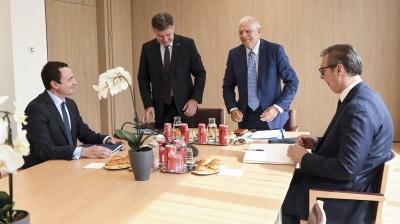 Both leaders were told that the EU wants a quick solution to the problem as it does not want another conflict in the region following the Russian invasion of Ukraine.

The meeting was called by EU officials in an effort to stabilise the situation following tensions in northern Kosovo, populated mainly with Serbs, sparked by Pristina’s decision not to recognise Serbian ID documents and car number plates. Kosovo declared independence from Serbia in 2008, but is not recognised by Belgrade as a separate state.

“Today, there is not an agreement, but we do not give up. We need to continue discussions, we need to look for a solution. The process will continue,” Borrell said.

He recalled that the meeting was called to calm down the situation on the ground following increasing tensions in north Kosovo.

"We see the return of war to our continent after the Russian invasion of Ukraine. We are facing a dramatic and very dangerous moment for our continent. And this is not a moment for increasing tensions – it is time to look for solutions and to solve long outstanding issues," Borrell added.

The barricades on two border crossings with Serbia were erected on July 31 after Kosovo’s authorities were set to implement the decision not to recognise Serbian ID documents and licence plates on August 1. The tensions calmed down after Kurti said he would postpone the implementation of the new rules until September 1.

“The international community does not want to see renewed tensions in the coming period, and the parties will be fully responsible for any escalation on the ground,” the high representative said.

He also said that discussions will continue in the coming days. “There is still time until September 1. I do not give up,” Borrell said.

It seems that September 1 is set as a deadline for both sides to find solution, as the same day Pristina plans to fully implement the entry/exit new rules, which were the reason for the tensions.

President Aleksandat Vucic said in a video message to Serbian people posted on Twitter that this was a very difficult day for Serbia and its citizens.

“I cannot say that it ended successfully,” Vucic said, adding that he wants to believe that miraculously “we can find some compromise solution”.

“We will continue to fight for peace and stability,” the Serbian president underlined.

Kurti has not released a statement on social media, but the government said in a statement following the meeting in Brussels that there were two topics on the agenda -  discussions on the general agreement on normalisation of relations between the two countries and the current political and security issues.

“Prime Minister Kurti pointed out the importance of legality and constitutionality in our country as guarantees of peace, security and equality for all citizens without distinction,” the government said without elaborating.

A day earlier, Nato chief Jens Stoltenberg, who met the leaders of Serbia and Kosovo urged both sides to “engage positively and constructively” in the high-level meeting in Brussels on the normalisation of their relations.

PM Kurti told Italian daily La Repubblica earlier this month that a risk of a new conflict between Kosovo and Serbia is high. Kurti said that before the invasion of Ukraine the chances of a new war were low, but now the situation has changed.

Regarding the recent tensions in northern Kosovo, Kurti claimed that the road blockades by ethnic Serbs were organised by Serbia and supported by Russia, one of Serbia’s biggest allies.