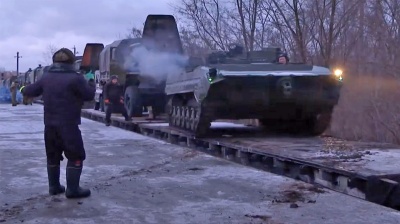 US warns Belarus to keep its commitment to neutrality in the wake of the increasing Russian military presence along the Belarus-Ukraine border.

On Monday, Belarusian President Alexander Lukashenko announced a military exercise with Russia along Belarus’ southern and western borders. The exercise was named “Allied Resolve” and would be held to practise a specific action plan against the Baltic states, Poland and Ukraine. The new large Russian military presence along Ukraine’s border with Belarus effectively encircles Ukraine, with Russian soldiers to the west in Transnistria, to the south in Crimea, and on all fronts to the east and north.

Yesterday, Belarusian telegram channels published videos and photos showing trains carrying military equipment through Russia and into Belarus. A member of the Conflict Intelligence Team investigation project told Radio Liberty that they’d never seen such a mass transfer from the Far East before; and according to a Telegram page run by Belarusian railway workers, all four eastern railway branches in Belarus are in use: Minsk, Gomel, Mogilev and Vitebsk. As a twitter user noted, this enables rapid troop and equipment transfers in a relatively small amount of time, and Russian missile transfers to the Minsk and Gomel regions have put Ukraine within close range of the BM-27 220mm multiple rocket launchers.

According to the Washington Examiner, a senior State Department official told reporters that he believes that Belarusian complicity in a Russian attack on Ukraine from its territory “would be completely unacceptable to Belarusians and to many inside the regime, as well as to us and our allies and partners” and that “we’ve made our concerns known to the Belarusian authorities privately.”

Retired four-star Air Force Gen. Philip Breedlove, Nato’s supreme allied commander when Putin annexed Crimea in 2014, told the Washington Examiner that putting Russian troops in Belarus would “be like [if] the Russians parked in central Virginia, facing Washington.” He continued, saying that “the bottom line is, you want to bring great pressure on Zelenskiy, put an invading force a couple of hours away from [the Ukrainian] capital with no military between you and it.”

Belarus announced last year that it might remove its writing on neutrality in its constitution and open up for Russian nuclear weapons to be placed in Belarus, which has been endorsed by Russian diplomats. According to the State Department official, “The breadth of the commitment to the neutrality concept, I think, is well understood amongst the elite.” In his opinion members of Belarus’s elite are increasingly uncomfortable with the direction and speed in which Lukashenko is taking Belarus closer and closer to Russia, saying: “That is not a concept that I believe has widespread support in Belarus’s elite.”

Belarus has long been committed to neutrality, and has long pursued a multi-vector foreign policy, trying to position itself evenly between Russia, the West and the rest of the world. The possibility for continuing this policy was ended in 2020 with the brutal regime crackdown on people who protested against the presidential elections which sparked an outrage from the west and the international community. The diplomatic conflict between Belarus and the West continued to deepen and during 2021 the Belarusian crisis became a global problem, mainly caused by the forced landing of a Ryanair plane at Minsk Nation Airport on May 23 and the arrest of the journalist Roman Protasevich. As a result, the West slapped a new round of sanctions on Belarus and ordered national airlines not to land in Belarus, and even to avoid its airspace. The second half of 2021 was marked by the migration crisis on the EU-Belarus border, which stirred up considerable political heat between Minsk and Western capitals. Western countries adopted a fifth package of sanctions and began to develop a sixth in response to the migration crisis, which they called Belarusian “hybrid warfare”.

All of this has given the Belarusian regime pariah status in the eyes of the West and the country's increasing isolation has made the regime seek closer and closer ties with Moscow. The question now, as the senior State Department official put it, is where Lukashenko's authority over Belarus ends and where the Kremlin's begins? Currently, where that line is drawn is becoming increasingly uncertain.