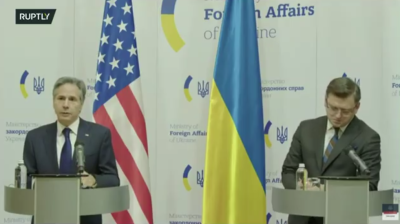 US Secretary of State Antony Blinken warned that Russia could invade Ukraine "at very short notice" during a trip to Kyiv ahead of a key meeting with Russian Foreign Minister Sergei Lavrov at the end of this week.
By Dominic Culverwell in Berlin January 19, 2022

US Secretary of State Antony Blinken arrived in Kyiv to show US solidarity with Ukraine and warned Russia could attack “at very short notice” as the frenetic diplomatic effort continues to stave off a threat of the invasion of Ukraine, speaking at a press conference on January 19.

Blinken arrived a day after Germany’s new foreign minister, Annalena Baerbock, was also in the Ukrainian capital before travelling on to Moscow to meet her counterpart, Russian Foreign Minister Sergei Lavrov, with much the same message and symbolism.

Blinken met with President Volodymyr Zelenskiy and Foreign Minister Dmytro Kuleba and is due to travel on to Berlin on January 20 before meeting with Lavrov in Geneva at the end of the week for another round of talks.

The diplomatic effort comes after the Russian Foreign Ministry issued an eight-point list of demands, including “legal guarantees” for no further eastward expansion of Nato that led to a week of meetings that ultimately ended with a meeting between Russia and the OSCE on December 13, with both sides doing little more than laying out their respective positions.

Blinken stoked tensions with alarmist warnings that Russia was poised to attack Ukraine, an intension that the Kremlin has repeatedly denied, despite moving some 100,000 troops up to bases near the Ukrainian border.

“If Russia renews its aggression and invades Ukraine then the US will provide additional material to allow Ukraine to defend itself,” Blinken stated in the press conference with Ukraine’s Foreign Minister Dmytro Kuleba after the meeting.

He stressed that the US prefers a “diplomatic path to de-escalate the conflict with Russia” but went on to say that the West would retaliate and Russia would suffer “massive consequences” if it chose to take military action.

The Secretary of State will meet with European allies in Berlin on January 20, including Baerbock, before travelling to Geneva to speak with Lavrov the following day.

Blinken’s decision to stop in Kyiv first shows the US’ commitment to consulting with Ukraine before decisions are reached with Russia on Friday. He emphasised that one of America’s principles is “no talks about Ukraine, without Ukraine”, despite Ukraine’s exclusion from last week's talks between Nato, the US and Russia. The West has been criticised by some for entering negotiations with Russia about Ukraine’s bid to join Nato without Ukraine being invited to participate in the talks.

Blinken also took the opportunity of the press conference to chide Bankova for its slow progress on carrying out reforms demanded by the international community and the International Monetary Fund (IMF) in particular.

Blinking spoke on the same day that former president Petro Poroshenko was in court facing treason charges in a case that NGOs and other critics have called politically motivated.

“One of Moscow's long-standing goals has been to try to sow divisions in Ukraine and make it harder for Ukrainians to work together to realise their Euro-democratic ambitions (...) Leaders inside and outside the Ukrainian government must put aside their differences in favour of the shared national interest,” Blinken said.

Blinken also singled out the slow progress Kyiv has made in completing the ongoing judicial reforms. He specifically urged the selection committee to finish a process of selecting judges that is core to the reform, which, as bne IntelliNews has reported, has been severely delayed.

New round of talks

Russia and the Western delegations went eyeball to eyeball at the first Nato Council meeting in two years in meeting on January 12, with the allies demanding that Russia de-escalate tensions by withdrawing its troops from the Ukrainian border region if talks are to continue.

“There was no commitment to de-escalate, nor was there a statement that there would not be,” US Deputy Secretary of State Wendy Sherman told reporters after the meeting. “Russia’s actions have caused this crisis and it is on Russia to de-escalate tensions and give diplomacy the chance to succeed.”

The tense meeting followed the talks in a Geneva meeting on January 10 between Russia and the US, where Russian Deputy Foreign Minister Sergei Ryabkov made it plain that the talks would fail if the Western allies did not agree to give Russia legally binding guarantees that Ukraine would “never, never ever” be allowed to join Nato. Ryabkov made it plain that the Kremlin would not accept anything other than “watertight, ironclad” legally binding guarantees that Nato would not expand further east after a round of expansions that started in 1999.

Ryabkov made a qualified offer the same day that Blinken was in Kyiv, suggesting that Russia would accept a guarantee from the US that it would always vote “no” to a Ukraine bid to join Nato, which could be a much easier deal to cut, as acceptance of a Nato membership bid requires a unanimous vote from the 30 members of the military alliance.

Following the week of talks, Blinken said both Russia and the US needed “time to take stock of those conversations”, hence his visit to Kyiv and Berlin to consult with US partners before meeting with Lavrov at the end of the week.

Responding to a journalist’s question, Blinken said that the written response to the Russian Foreign Ministry’s eight-point list of demands was not ready and he was not carrying the document with him to his meeting with the Russian foreign minister.

“We need to see if there are still opportunities to pursue so that we can pursue the dialogue… Let’s see where we are after Friday,” he said.

However, Blinken made it clear that America will refuse Russia’s key demand of “no eastward expansion of Nato”, saying this demand was a “non-starter.”

Part of the motivation for Moscow's ramp-up of tensions is the increased inflow of money, weapons and materiel that has been flowing into Ukraine in the last year. Earlier in the day Blinken announced that the US had increased military aid to Ukraine by $200mn on top of the $400mn it already expects to receive this year. In addition, the UK has cut a GBP1.3bn ($1.77bn) deal to upgrade Ukraine’s navy and this week began flying large shipments of anti-tank hand-held missiles to Kyiv as the crisis mounted. Blinken confirmed that military aid in 2021 was increasing and that the US had sent “more materials to Ukraine last year than at any time since 2014”. Some military analysts have speculated that the Russo-US conflict has already entered into a classic “spiral” or escalatory phase that often leads to war.

Nevertheless, Blinken also struck an upbeat tone, saying that the US believed there were several areas in the MFA’s list where negotiations could be fruitful “on a reciprocal basis to improve security for everyone”, which include: arms controls, risk reduction, greater transparency, and looking at the scope and scale of military exercises.

As Blinken said, “the world is watching”, and his meeting with Lavrov at the end of the week will be closely scrutinised for signs of a potential compromise.

All hype and no bite?

Despite Russia’s military build-up last year and the recent deployment of troops and equipment to Belarus, bne IntelliNews has reported that a full-scale invasion of Ukraine by Russia remains highly unlikely.

The costs to Russia of an invasion – in economic, political and human lives – would be extreme, something that Russian President Vladimir Putin’s slowly falling approval and trust ratings at home make extremely unappealing to the Kremlin.

While Russians overwhelmingly have supported the annexation of Crimea, they are a lot more uncomfortable with the war in Donbas; eastern Ukraine could be taken easily, but western Ukraine could not. Finally, the international diplomatic backlash would be catastrophic for Russia’s economy.

The West has already prepared a potential response to an open conflict in Ukraine. US Democrat senators unveiled a fresh package of sanctions, nicknamed “the sanctions from hell”, to punish Russia should it invade Ukraine, in a move backed by the White House. Meanwhile, Baerbock announced on Monday that Germany would block the Nord Stream 2 oil pipeline if Russia attacked Ukraine.