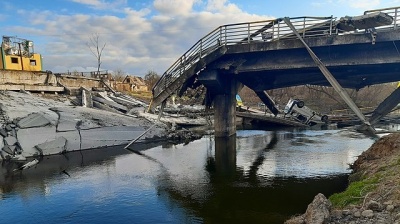 Antonio Guterres, Secretary-General of the United Nations, is in Ukraine for a meeting with President Zelenskiy. He has visited the site of alleged atrocities committed by Russian soldiers, and is expected to use his visit to stress the need for more humanitarian support in warzones.

Guterres started his visit by visiting destroyed towns on the outskirts of Kyiv.

Standing beside bombed-out apartment blocks in the northwestern suburb of Borodyanka, he told reporters that “When I see those destroyed buildings, I imagine my family in one of those houses now destroyed and black. I see my granddaughters running in panic.”

He also visited Irpin and Bucha, the sites of alleged massacres of Ukrainian civilians by Russian troops.

“Here, you feel how important it is for a thorough investigation and accountability,” Guterres said in Bucha.

On Tuesday, 26 April Guterres met Russian President Vladimir Putin in Moscow and held a press conference with Foreign Minister Sergei Lavrov. Guterres was direct with the Russian politicians, insisting on describing the invasion as a “war”, and telling Lavrov that ultimately “there are Russian troops in Ukraine, not Ukrainian troops in Russia.”

He also used the meetings to urge Russia to collaborate with Ukraine on safe corridors for civilians, particularly in areas of heavy fighting like Mariupol. Putin replied that Guterres had been “misinformed”, and that over 100,000 civilians had already been given safe passage out of the war-ravaged city.

The timing of Guterres’ visit to Kyiv ruffled some feathers in Ukraine. Commentators said that he should have seen the sites of alleged Russian atrocities before trying to reason with the perpetrators, and that visiting the invader before the victim sent the wrong message.

Guterres reportedly spoke to a number of civilians in the towns he visited. He denounced the war as “absurd”, adding that “there is no way a war can be acceptable in the 21st century.”

Guterres was expected to meet Zelensky for talks in Kyiv on Thursday afternoon.