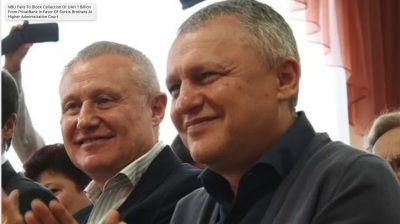 A court ruled that Privatbank must return $250mn to the Surkis brothers, who are long time associates of oligarch Ihor Kolomoisky
By bne IntelliNews April 15, 2020

On April 15, the Kyiv Court of Appeals upheld a previous ruling under which state-controlled Privatbank will have to pay more than $250mn to six offshore companies belonging to local oligarchs the Surkis brothers, who are associates of the bank’s former owner oligarch Ihor Kolomoisky, Interfax-Ukraine reported.

Under the original ruling by a Kyiv court earlier this year, Privatbank, which was nationalised in December 2016, has to fully repay the Surkis brothers' firms the amount kept in their accounts at Privatbank's Cyprus subsidiary from 2012 to 2014, as well as accumulated interest. Ukraine's Finance Ministry appealed against the decision but the court of appeals sided with the Surkis brothers.

The situation became confused the same day as the court ruling as Justice Minister Denis Malyuka took to Facebook and said that Privatbank will not have to pay out and that “nothing has changed.”

Malyuka denies the claim made by Privatbank’s lawyers that it has lost the appeal. According to him, the Kyiv Court of Appeals has upheld the decision of the Pechersky District Court of February 25 and “actually just repeated the content” of the decision of the Pechersky Court dated Feb. 9, 2017 on the obligation of PrivatBank’s servicing the deposits of a number of foreign companies.

“On April 15, 2020, the appellate court upheld the decision of February 20, 2020. What has changed over the course of three years? Almost nothing. Well, definitely nothing significant,” the minister wrote on Facebook .

The now state-owned Privatbank has argued that the Surkis brothers and their family members whose money was kept at Privatbank were affiliated with Kolomoisky and his partner Gennady Bogolyubov and therefore are not entitled to the compensation of their funds under the bankruptcy proceedings. The NBU pointed out that Igor Surkis and Kolomoisky are shareholders of the 1 + 1 TV channel, which indicates their connection.

When the bank was nationalized in 2016 the obligations of related parties were subject to the bail-in procedure and were exchanged for shares of the bank's additional issue.

On May 17, 2017, Kyiv's District Administrative Court found that decision illegal and overturned the NBU decision to recognize the Surkis family as persons related to Privatbank, and revoked the orders of the provisional administrator of Privatbank concerning individuals' accounts. The Surkis family and persons related to them have filed 42 claims against the National Bank of Ukraine.

“In 2016 the National bank decided that these companies are affiliated entities to beneficial owner of Privatbank and converted all deposits ($250 in total) into banks's shares (bail-in procedure),” Kaleniuk said.

Surkis UK companies contested this decision in Cyprus court, which is still pending. The same companies also asked Ukrainian court for an order to forbid Privatbank from using the deposit funds until the Cyprus decision will be issued.

“In 2017 Pechersky court without actually waiting for a resolution in Cyprus court issued an order asking nationalized Privatbank to comply with the "deposit obligations" - an order impossible to implement as deposits were already transferred into shares during bail-in,” Kaleniuk said. Kolomoisky is widely believed to be influencing the courts and has won a series of questionable and surprising results in court in his campaign to have the bank returned to his ownership. “State executor asked the court to clarify how to execute the court order - and today's decision confirmed that execution means full payment back of all deposits to the six UK Surkis-controlled companies.”

“To sum it up: Ukrainian court without event hearing the actual substance of the case, which is even not under Ukrainian jurisdiction and is under pending hearing in Cyprus courts, obliged Privatbank to pay $250mn to six Surkis family companies,” Kaleniuk said.

The former owners of Privatbank looted of $5.5bn. An NBU audit eventually concluded that over 99% of the loans on the bank’s books were to related parties. Privatbank has filed a separate appeal, but it is not yet clear when and if it will be considered.

The court of appeals' ruling may create a precedent for other individuals also considered to be affiliated with the lender by court rulings. In that case, the Ukrainian government will have to pay them a total of UAH30bn ($1.1bn), nv.ua reported earlier.

In a related case, the Grand Chamber of the Supreme Court of Ukraine will hearing a lawsuit filed by the Surkis brothers against the National Bank of Ukraine to recognize them as persons related to Privatbank and to exchange their Privatbank deposits for shares on April 27.

NEWSBASE: A closer look at Niger with Savannah Petroleum